What Does Russia Want? 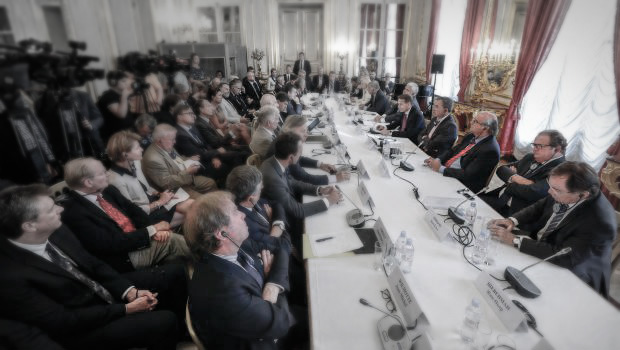 An important round-table discussion was held yesterday evening (Monday, September 1st), in Paris, under the auspices of the Franco-Russian Dialogue Association, to attempt to assess the political solutions to the Ukrainian crisis, and to exit from the spiral of escalation. This round-table discussion brought together leading Russian politicians and representatives of diverse French political forces, of the business community (Total, GDF-Suez), and of the cultural and scientific communities.

Without it being possible to list them all (and we apologise in advance to those who have been forgotten), those present included:

The French side included, among others:

From the business community were:

The exchange, which lasted two hours, enabled, on the one hand, a gauging of the mutual commitment to Franco-Russian friendship, and also the common concern at the turn of events in Ukraine, and its consequences for European politics and economy. The situation of the civilian population is dramatic. It should be pointed out here that, for the American journal, Foreign Policy, the bombardment of the civilian population, to which Kiev’s forces have made systematic recourse, could be classified as “war crimes.”i The business leaders present stressed the profoundly destructive and political unjustifiable character of the mutual sanctions (both European and Russian) imposed heretofore. The exchange lasted for more than two hours, and the Russian officials answered questions from the French participants. One of the main themes was, of course, the Russian position regarding this crisis.

The Position of Russia

On this first point, Mr Sergey Naryshkin was very clear, and he stated that the conflict in south-eastern Ukraine was an internal conflict between the government in Kiev and the insurgents. There could therefore only be a Ukrainian solution to the crisis. However, the internal crisis in Ukraine is now threatening to obstruct the development of relations between France and Russia. But these relations are important not only for the two countries, but also for the future of Europe. There is a problem with countries who seek to “demonise” Russia for their own specific interests. The mass media in France, and in certain European countries, have shown bias against Russia. Note, however, that, particularly in the British press, one begins to see more measured perspectives.ii

He also added that there is a huge problem of refugees in Russia (over 150,000) and that it is rather uncommon that civilians flee to their “aggressor.” These refugees are fleeing the government troops’ bombardment of civilian targets—bombardments in which Grad and Uragan rocket launchers have been used as well as self-propelled howitzers. Tens of thousands of housing units have been destroyed. We should also oppose the anti-Russian hysteria of some.

Concerning the temporary exclusion of Russia from the Parliamentary Assembly of the Council of Europe (PACE), he recalled that the European parliamentary tradition is a democratic tradition. Exclusion is alien to this tradition. Jean-Claude Mignon, ex-President of PACE, expressed the same view, saying that he had voted against this exclusion.

The discussion then moved towards Russia’s reactions since March. The referenda in Crimea and the South-East were described by Sergey Naryshkin as reactions to the aggressive behaviour of the Kiev leaders. But one should note here the difference in treatment by Russia of these two referenda. Russia recognised Crimea’s, but did not recognise those held in the Ukraine’s East. Sergey Naryshkin reaffirmed that a dialogue is necessary if we want to achieve a de-escalation. There is a need to reach a consensus between the different parties to the crisis.

The question of sanctions was raised, in particular, by Christophe de Margerie as well as by the director of GDF-Suez. De Margerie said that the importance of economic relations was central to dialogue between our two countries. French businesses are very concerned regarding economic exchanges which have developed greatly over these last twenty years, between the two countries, but also at the level of Europe, into whose economy Russia’s is partly integrated. Thus, one should avoid an escalation of sanctions. The role of the press is important here. It was also noted that this role is, in general, noxious in France. Today, some companies tend to anticipate new sanctions. This is not healthy. One should not engage in one-upmanship.

Sergey Naryshkin responded to these interventions, saying that, effectively, the question of sanctions complicates the settlement of the Ukrainian crisis. Russia does not want to engage in this game, but she is obliged to respond, which she did with the embargo on foodstuffs. She did this with much deliberation. The question of economic relations between the EU and Russia is at stake.

Dynamics of the Crisis

This third part of the discussion generated a lot of attention. Mr. Pushkov said that the situation in Ukraine was in fact very complex. The concept of federalisation was possible, and it was this which Russia supported. But now there had been a change because of the violence and of Kiev’s action against the civilian population. Kiev has consistently refused negotiations. In fact, what was accepted in Québec and Belgium was rejected. The priority is to ask the insurgents what they think. Russia supports the idea of direct talks between Kiev and the insurgents. She supports the principle of a “special status” for the people of the South-East, whatever that may be. She also supports the idea the idea of federalisation if this idea is accepted by the insurgents. But he wished to recall that the insurgents are not puppets [of Russia].

Jean-Pierre Chevènement then intervened, and he noted that we were presently in a spiral linked to the European Union’s own decision making process, a point regarding which Nicolas Dupont-Aignan had already intervened. The position of the European Union is held hostage by certain countries, especially Poland, who are doing nothing for the resolution of this crisis. Jean-Pierre Chevènement also described what was now happening as a “cycle of stuipidity”, in which some, particularly in the EU and NATO, bear a heavy and historical responsibility. Clearly, France should unshackle itself from the EU and NATO in order to restore the ability to make heard what the ex-minister described as “the voice of reason.” The dramatic sequence of events of 1914 should be remembered here, even if the situation is not as dramatic as it was then. This is one of the lessons of History. Jean-Pierre Chevènement confirmed that the Russian and French governments maintained a close and constant dialogue to prevent a degeneration of the crisis, and that Presidents Hollande and Putin spoke regularly over the phone. This is an important point, and, in a sense, reassuring. But this will not be enough. A strong French and German diplomatic initiative is required on the subject.

It is possible to make several observations here regarding the dynamics of the crisis. The Ukrainian crisis is in fact a product of the destruction of the framework of international law that we have experienced since the middle of the 1990s and which manifested itself around the subjects of Kosovo (1998-99), of Iraq (2003)—the magnitude of whose consequences are today being measured—and, more recently, of Libya. Today we are tasting the bitter fruits of this destruction of the rules of international law; a destruction for which the United States and NATO bear the responsibility. It is not possible to find a framework for resolving this crisis without rules that are acknowledged by all. International law is still based on two rules, which are profoundly contradictory: respect for the sovereignty of states AND the right of peoples to determine for themselves. Mediation between these two principles has been dramatically and permanently weakened by the actions of NATO states and the United States since the end of the 1990s. It is these mediations that we must rebuild. It has thus gone from a crisis internal to Ukraine to an international crisis, and this largely due to the degree of violence employed by the government in Kiev. On this exact point, there is a new contradiction between the position adopted regarding Libya, where the protection of the population justified a foreign intervention, and the Ukraine. This should be borne in mind.

This begs the question of an eventual ceasefire, and of its guarantees. A ceasefire is needed in the shortest time-frame. The continuation of combat can only make even more insurmountable the wall of hatred in the Ukraine, and make more difficult the political solution to the crisis that must nevertheless surely be found. It is clear that what was possible at the beginning of June is no longer possible. The longer hostilities last, the more difficult will it be to arrive at a political solution. Hence, France and Germany should exert strong pressure on the Kiev government in order to constrain it to accept a cessation of hostilities, dependent on Russia putting pressure on the insurgents so that this cessation is accepted. From this perspective, joint action with Russia is required, whether or not this pleases some. This ceasefire should be verified and supervised. This will thus require troops to be interposed between Kiev’s army and the insurgents’ forces. We have to start thinking about this question, knowing that Russian troops will be unacceptable to Kiev, as would be those from NATO states and the EU with the insurgents.

This political solution will be difficult to find. Mr. Naryshkin alluded to the “asymmetric federalism” that exists in Canada for Québec.iii It is a potential solution, but alas not likely. Another solution would be that of an “autonomous region” or of an “autonomous Republic”, in the framework of the Ukrainian state, on the model of Kurdistan in present-day Iraq. Beyond these solutions, the only possible outcome would be that of independence unrecognised by the international community, as is the case with Abkhazia and South Ossetia. The solutions of an “asymmetric federalism” or “autonomous Republic” must be guaranteed by both the states of the EU and by Russia. We will, once again, have to work with the Russian government. However, we are measuring what was lost when Kiev officials refused to organise elections for a constituent assembly in order to rewrite their country’s constitution and put in place a federal system.

Once this political solution is found, the economic viability of Ukraine, and of the autonomous regions of the country’s East, must be ensured. This requires a close look at the dynamic of regional development, once the tasks of reconstructing infrastructure and buildings destroyed during bombardment by Kiev’s Army are completed. These tasks also involve funding, and agreement must be reached on who will be the donor countries. To leave the burden solely to Russia would be, from a political standpoint, a tragic mistake, since this would mean we abdicate the opportunity of influencing the insurgents’ leaders. Again, it will require agreement between the different involved parties, including Russia and the EU.

ii As in The Guardian newspaper article, http://www.theguardian.com/commentisfree/2014/aug/29/ukraine-putin-sanctions-west-biggest-mistake

« Interview with Alexey Mozgovoy, Commander of the “Ghost” Brigade, 29/08/14
Alexey Mozgovoi: I Will Continue to the End! »

9 thoughts on “What Does Russia Want?”