Motorola won even in death

At the entrance to the Donetsk high-rise, they killed a “Komi carwasher”, but it turned out that he was a People’s Hero of the Donbass, who was mourned today even on the other side of the front-line. There, they wept quietly; in Donetsk, in full voice.

As always happens in retrospect, after the terrible and irreparable event, the security measures at the farewell to the Sparta commander were simply unprecedented. From early in the morning, a good part of the city centre, the opera theatre and all adjacent streets, was cordoned off and blocked. People had started coming from nine in the morning, shifting to an autumn chill, waiting silently. The queue grew, crossed the square in front of the theatre, snaking along the broad avenue. It was impossible to single out any particular social group from the crowd; it would be easier to say: “all had come.” The elderly and very young girls. Many wounded—with walking-sticks, on crutches. Soldiers from various units: in ceremonial camouflage, gorka [a smock and over-trousers ―ed.]faded to white or standard tsifra [a Russian digital camouflage pattern ―ed.]. Young boys were walking in groups. In the courtyards of the Donbass, for already the second year, boys have been playing at being “Motorola” or being in “Sparta”. A girl in uniform, about eight years old, came to the coffin, let go her grandmother’s hand, laid some flowers, crossed herself and saluted.

Those who had said goodbye did not disperse. We go along the line with a video camera, stop, and ask people:

“Who was Motorola for you?”

The most mentioned word—“Hero.” And this is not the fruit of “Kremlin propaganda,” but the voice of the Donbass, which has suffered a serious loss.

“Motorola—our hero, our defender, our son,” Tatiana, with a huge bouquet, sighs: “It’s very hard. Eternal memory to him. And to his guard. And all our lads who perished. Not for nothing they died, everything will be okay with us.”

“He is a hero of the DPR. He fought for our freedom, for our liberation from the Ukrainian invaders,” says eighteen year-old Denis: “We came to honour his memory. His struggle showed us, the younger generation, that there are people who fight for us. Of course, this is a very hard blow and a great loss for the Republic and for each citizen. He is an example of courage and heroism for us.”

“It happens that he wasn’t a stranger to me but a friend.” Elena can barely hold back her tears. “And for the Donbass—a symbol, a national hero. He’s a soldier, a Man with a capital ‘M’. He’s with us, he stayed here. Donetsk—it’s him. This is his city, his land, he became a part of it, became the Donbass itself, all of us.”

Not everyone made it before noon. For a long time, almost for half an hour, a huge crowd was waiting for when the coffin would be carried out and placed on a gun carriage piled high with flowers. The troops of Sparta, dressed in black Naval Infantry uniforms—as a tribute to the Marine, Arseniy Pavlov—carried it out. And in that moment people cried out “Thank you! Motorola!” A roar of applause went through the crowd. The engine of the artillery tractor growled, and the congregation from inside the theatre joined the column with republican flags—all simply did not fit into the space before the theatre, and people were waiting for the procession on the avenue. Tens of thousands of people united by the same grief, the same pain, the same loss. Terrorists are not buried thus; true People’s Heroes are escorted thus.

“He was a humble guy. He didn’t pluck the stars from the sky,” remembered Militiaman Prapor, who we knew even from Slavyansk: “First he was commander of a small group. He proved himself in Semyenovka. Losses in his unit were the lowest, guardian angels protected him and his people. My friend was killed. A lot of my friends were killed. In two years I lost so many comrades that one constantly expects this.”

“Motorola was a man who in the most difficult situation could find an unconventional, creative solution,” Gena Dubovoy, former military correspondent of Sparta, smiled. “In this cheap world there are many simulacra, imitations and bullshit, but Motorola was really charismatic. Such people come once in a century. He elicited absolute and unconditional trust. People were ready to fight and shed their blood just because he looked favourably on them. Meaning—he was God’s chosen one.”

Only the closest friends and colleagues came to the cemetery. The funeral procession slowly approached the place of burial. Borne on red cushions, Arsen’s medals glittered in the sun. The most important—the Hero’s Star of the DPR—was carried by Arsen’s nine year-old son, Danil. Great tears rolled down his cheeks. His father had visited him in Russia and was even planning to take him to Donetsk. But after yet another assassination attempt he had decided not to risk it.

“Today we say farewell to a man who can be called one of the founding fathers of our state,” Aleksandr Zakharchenko appealed to the soldiers. “He was a legend, he was my close friend. I have no words… No-one like him. But in his place dozens will rise. And together we will ensure that his death was not in vain. I know that the guys from Sparta promised him they’d get to Slavyansk. Men, we’ll get there. Out of principle and for Motor’s sake.” 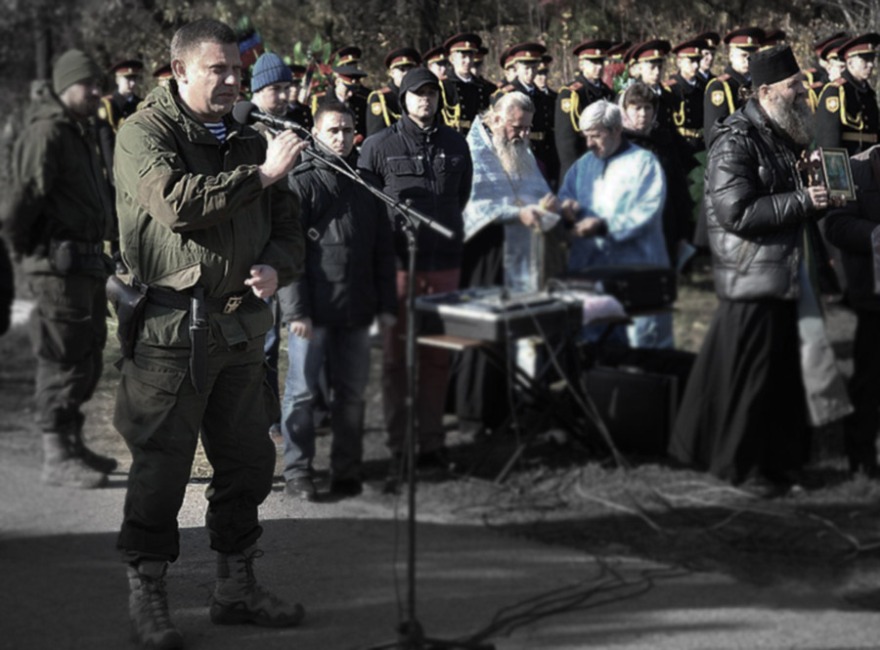 “Arsen, I promise you, I will continue your work, whatever it might cost us,” swore Motorola’s closest friend, his deputy with the call-sign Vokha: “He didn’t consider himself a hero. All his awards he credited to his people, his battalion. Motor, I promise you the battalion won’t collapse, whoever puts pressure on us. We’ll be a single organism, a single fist. No one will be able to break us. You raised worthy warriors. We will raise your children.”

Danil approached his father’s coffin and could not contain his child’s sobbing. The lid was shut. “You cannot take him from me!” moaned Arsen’s wife Lena, exhausted from these three days. “He’s cold there, let me go to him!” Seasoned soldiers turned away, hiding their tears.

“Men,” Aleksandr Zakharchenko dropped three handfuls of earth into a pit, “let’s promise each other. When we get to Slavyansk, those of us who are still alive, we’ll build a monument to Motor on Karachun [the hill commanding Slavyansk from which Ukrainian troops bombarded the town ―trans.]. You promise?”

6 thoughts on “Motorola won even in death”