Map of Operations, August 10-25, 2014 – Created by Kot Ivanov and Anthony Hartin
For Current Maps Refer to the Top Menu

Official Briefing from the DPR, as of August 25, 2014, and Commentary 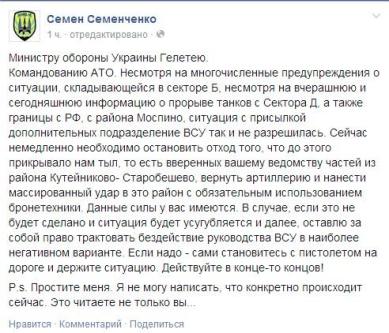 From: Semen Semenchenko
(commander of the Ukrainian Donbass punitive battalion)

To: The Minister of Defense of Ukraine, Valeriy Geletey.

To the ATO(Anti-Terrorist Operation)* command. Despite the numerous warnings about the situation that is currently unfolding in sector B, despite the information from yesterday and today about the tank breakthrough from sector D and also from the border with the Russian Federation, from the area of Mospino, the situation with regards to sending us additional units of the UAF(Ukraine Armed Forces) was never resolved. Currently it is necessary to stop the retreat of the units that up until now covered our rear. Those units that report to your HQ, from the area of Kuteynikovo-Starobeshevo, must return the artillery and to perform a massive counterattack into the area [of the breakthrough], and to use armored vehicles in this attack. You do have these forces. If this does not get done and the situation will continue to deteriorate. I reserve the right to interpret the lack of activity of the UAF leadership in the most negative light. If needed – you personally must stand with a pistol on the road and take control of the situation. Act, finally, act!
P.s. Please forgive me. I cannot write what exactly is happening right now. You are not the only one reading this.

In the course of the offensive operation, the militia forces have completely destroyed the government military base in Sedovo, and routed all the enemy checkpoints around Sedovo and Novoazovsk. There’s an ongoing sweep of these two cities for remaining Junta forces. Taking control of Novoazovsk will open a direct road to Mariupol for the DPR army forces, and we plan to take this city in the near future.

Fierce fighting is happening near the Svyato-Uspensky Nikolo-Vasilyevsky monastery (village Nikolskoye of Volnovaha district). In the settlement of Markino there is fighting against the entrenched militants of the punitive battalions “Dnieper-1” and “Donbass”. The LPR militia conducted a recon by combat action on Lutugino. There is information that the town of Rodakovo has been taken [by our units].

According to the data of the DPR Ministry of Defense HQ, the government forces lost 110 people KIA and 75 WIA fighting for Ilovaysk. 28 military vehicles were destroyed or disabled. By the morning of August 25th, yet another (third) battlegroup of the enemy was also fully encircled in the area of the settlements Stepanovka, Amvrosiyevka and Stepano-Krynka.

The whole night militia forces were focused on narrowing the encirclement around the two blockaded Ukrainian battlegroups in the area of the settlements Voykovsky, Kuteynikovo, Blagodatnoye, Alekseevskoye, Uspenka, Ulyanovskoye, and also near the settlement of Yelenovka. According to the intelligence reports, in these encirclements there are more than 40 tanks, about 100 IFVs, APCs and airborne IFVs, 50 MLRS (Multiple Launch Rocket System) “Grad” and “Uragan” vehicles, and more than 60 field artillery and mortar pieces.

As a result of a recon by combat action, detachments of the DPR army entered Yelenovka, destroying up to 8 tanks, up to 19 armored vehicles and a mortar battery. The enemy was pushed out of the two checkpoints on the road from Donetsk to this settlement (i.e. Yelenovka). Three prisoners were taken, three MT-12 anti-tank guns with ammunition, an MTLB APC with a ZU-23-2 mounted, and a GAZ-66.

The militia launched offensives on two major cities – Severodonetsk in the northwest of Lugansk region, and Debaltsevo – in east of Donetsk region. The militia is concentrating considerable forces by Lisichansk and Severodonetsk, on the outskirts of which (Severodonetsk) the LPR militiamen have already occupied the villages of Belaya Gora and Borovskoe. Offensive continues on all fronts.

PS. The last phrase is a joy to read. But, actually, the reports from the last 3-4 days are pleasant in every way. Having survived through the darkest days in mid-August, the militia managed to not only stop the advance of the junta, but to also launch a decisive counter-offensive with the goal of defeating the entire southern flank of the junta forces in Donbass. For now it is absolutely unclear when and with what forces will the junta try to break through to the surrounded forces south of Donetsk, and how control over their intercepted communications could be restored.

About the Militia Counter-Offensive

1. The situation has become precarious for the Junta in the area of ​​Novoazovsk and Mariupol. The Militia forces that penetrated from the north, and also those that moved along the border with the Russian Federation, created an operational crisis in the area of Novoazovsk, which in itself implies a threat to Mariupol. The panic on the Junta-aligned websites is not without foundation. As we mentioned earlier, there are very few combat-capable units there – a hodgepodge of police, punitive troops, border guards and air defense personnel, clearly not the forces you can repel a serious Militia offensive with.

For now the Junta is saved by the fact that the Militia forces there are not so big and they are not achieving decisive results yet, although the threat has already become very serious. The thing is, that by taking advantage of the movement of Militia sabotage-reconnaissance-groups (SRGs) to the south of the captured “Uspenka” border checkpoint, the Militia also advanced along the border with Russia – which was cleared from the Junta border guards – creating a local superiority in a location that is critical for the Junta. This is the flip side of the Junta’s decision to stop fighting for the border, due to the heavy shelling of the Junta positions near the border by the Militia and “from the territory of the Russian Federation”. Currently, the Junta faces a very unpleasant prospect – either it has to urgently find reserves for the new front that suddenly opened up, or else it risks losing Novoazovsk and may face a real threat of losing Mariupol. In general, this blow is very unpleasant for the Junta, and it is further complicated by the problems to the south of Donetsk. 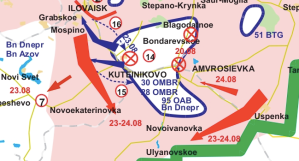 2. The gap in the front to the south of Amvrosievka, which the Junta recklessly didn’t plug for a few days, led to a disaster as expected. Not only did the Militia use the gap to advance to Uspenka and Novoazovsk and to create a threat for Mariupol. Also, the Junta units that were drawn into the battle for Ilovaysk have spent their reserves, which resulted in a Militia advance onto those Junta battle groups’ communications and the threat of attacking Militia units taking Amvrosievka. An encirclement of a kind emerged, which is already the 3rd encirclement in the south. Although this one is more of a partial encirclement – the Militia intercepted a number of important roads to the south of the main forces of the Junta battle group, but there’s no talk yet about a complete encirclement across all paths, because the Militia are actually encircling a larger force with a smaller one. In the next few days the Junta will try to break out of this critical encirclement, but if they fail to do this, then the first two southern cauldrons will be chump change compared to this one. 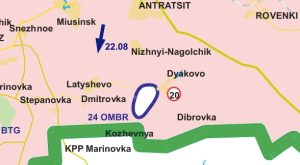 3. The encirclement by Dyakovo is still not eliminated, the encircled forces were given standard terms – leave and be interned in Russia, handing over the vehicles and weapons – but their leadership refuses to accept those, for now. But overall, the elimination of that encirclement is just a matter of time and losses. Of course I would prefer for the Militia to get the vehicles.

In general, what is happening is indeed a counter-offensive, albeit with insufficient forces. However, the blow was dealt at the time when the Junta just suffered a defeat of its offensive towards Donetsk, and this counteroffensive immediately triggered a serious operational crisis for the Junta. The very nature of the events in the Donbass is changing and now the argument is starting to shift from “will Novorossiya survive?” to “what consequences will there be of the Junta’s defeat in Donbass?”;  including the question of “what borders would be the starting point of negotiation?”. Perhaps the first diplomatic overtures will happen tomorrow in Minsk.

A Short but Important Update

1. About Strelkov: The news is ahead of the event. He got an offer to move in and become a military adviser in the Krasnodon HQ, but he did not yet agree to this. Someone apparently has seen it fit to leak the info to the press. What were the goals of this leak, good or bad, is yet unclear.

2. The Panic in Mariupol: As I wrote before, the threat on the outskirts of the city was multiplied by the confusion in the area, so when one of the Junta armored columns retreating from Novoazovsk was mistaken for Militia, this led to the hysteria of “DPR tanks are just about to roll into Mariupol!”

Hence the traffic jams of civilians and Junta soldiers at the highway to Berdaynsk; people thought Mariupol would be taken today and in a panic rushed out of the city. Interestingly, when it came to running, the nationalist guard units easily outpaced the civilians, leaving just one punitive battalion and the remnants of police forces to defend Mariupol. This story is very significant in the sense that it clearly shows how panic sweeps the entire management system – from the lowest neo-Nazi of the “Azov” battalion to the Gauleiter (chief overseer – Ger.) of Mariupol. In reality, advance Militia groups are fighting on the outskirts of Mariupol, and Junta is reporting that they are about to create a reliable line of defense and stop Militia forces from entering Mariupol (Novoazovsk is already written off, apparently).

3. South-west of Donetsk there is a gaping hole in the Junta frontline, with nothing available to close it. Most of the supply routes of the southern Junta battlegroup are intercepted by the Militia, or under fire and thus impassable. The Junta’s situation is rapidly deteriorating and can potentially develop into more than just another encirclement, with heavy losses – but a full-blown disaster with the collapse of the entire southern front of Junta forces in Donbass. In the next few days the Militiamen are expecting enemy reserves from the rest of Ukraine, which are now being hastily redeployed to reverse the effects of Militia breakthroughs. Given that the forces of Militia are not so large, heavy defensive battles against shock mechanized battle groups trying to break the encirclement are likely. As you can understand, there is no possibility of a continued assault on Donetsk anymore.

Taking this into account, the defeat of the Junta to the south of Donetsk will have implications for other areas – the Militia forces are moving towards Debaltsevo and thinking about attacking Artemovsk and Konstantinovka. But as the main forces are occupied in other areas, any action there is mainly just to pin Junta forces in place.

4. There is also this unverified information: In the Rostov region, there were a series of bizarre murders on the M4 highway. Unknown criminals lay out a strip with nails across the asphalt, and then shoot the drivers that come out to see what was the matter. They do not take the cars, or personal belongings of those killed. There were 3 or 4 such cases. There is a suspicion that there may be some Ukrainian Neo-Nazis at work. We are checking the information.

Overall, we are seeing the war in the Donbass completely change direction, in real time. But the victory is not yet assured, and in the coming days, the Junta will do everything possible to turn this difficult situation in their favor.