Translated from Russian by Gleb Bazov / edited by @GBabeuf

Ukies do not understand the difference between “surrender” and “retreat.” Paulus surrendered; Strelkov merely retreated—taking some Ukie armoured vehicles with him. But he left surprises.

As I predicted, with the coming of night, fighting flared up in the city [between Ukrainian forces] and the saboteur-scouting groups that remained behind—each consisting of two men wielding grenade launchers, a sniper and a driver/communications officer.

Ukie armoured vehicles are rushing around Slavyansk—the same equipment that the locals, for some reason, failed to welcome with flowers. They did not come out to welcome them at all. A fiasco. Ukies did not try to occupy the SBU [Note: Ukrainian Security Service], the City Council or the city police headquarters buildings. They must have at least a partial familiarity with the history of the Great Patriotic War, as they spent the entire day looking for landmine-surprises left behind by Strelkov.

July 5, 2015—A Conversation with Old Friends from Kiev

Video: An Attack on an LGBT Club “Pomada/Lipstick” in Kiev

My old acquaintances came to Moscow. A husband and his wife. They are native-born residents of Kiev. Now they are trying to find a buyer for their one-bedroom flat in the centre of Kiev, or to exchange for the same square footage, but on the outskirts of Moscow. He is an electrical engineer; she is a lecturer at a university. In January and February they used to go to Maidan, demonstratively wearing pans on their heads, and kept trying to convince me that the people had risen against the plutocrats in power.

They are hoping that they will find Muscovites willing to move to democratic and free Ukraine. I suggested they tune in to “Echo of Moscow” [radio station] or to the “Rain” TV channel [Note: Dozhd’: both of these media outlets are considered to be rabidly pro-Western]. Who knows, maybe they will get lucky?

Q: Why did you decide to leave your home town? After all, you were both born in Kiev and used to always take pride in that fact.

A: Kiev has become a scary place to live, Sasha. For half a year now, people have been divided into two classes: those in masks are permitted to do anything they want, and, for that reason, they think themselves entitled to dictate their demands to everyone else. Moreover, they don’t care who’s in front of them; they dictate even to the elected president how and what to do.

These are youths, with sticks and guns, who are very well informed and they can find anything they want about their victim: where he lives, where he works, who his wife is, which kindergarten his kids attend. Since February, thousands of people have disappeared in our city. And everyone keeps silent about it; they’re all intimidated and afraid. At any time, bandits in masks can show up at your door, and there’s no control over them, not by police, not by the leadership of the city or the country. If you’re in a mask, you’re über-Ukrainian; if you’re without one, you’re second class—regardless of whether you’re Ukrainian or Russian.

Q: It can’t be that serious, can it? And you can’t get a policeman to demand that they take off their masks and bring them to order?

A: You can say that we basically don’t have any police any more. They’re themselves afraid of those who wear masks.

Q: So why don’t residents put on masks themselves?

A: If I put on a mask without being a member of one of the gangs, they’ll immediately figure me out and will surely do away with me, because wearing a mask is a privilege that not everyone is entitled to. It’s become as if we were living in the movie “Kin-dza-dza”, except instead of yellow pants you have masks, and instead of saying “Ku” three times, you have to belt out “Glory to Ukraine-Glory to Heroes!” and jump when they tell you to, to prove that you aren’t a Moskal [Note: a racist term used against Russians]. And, at our age, it’s too difficult… 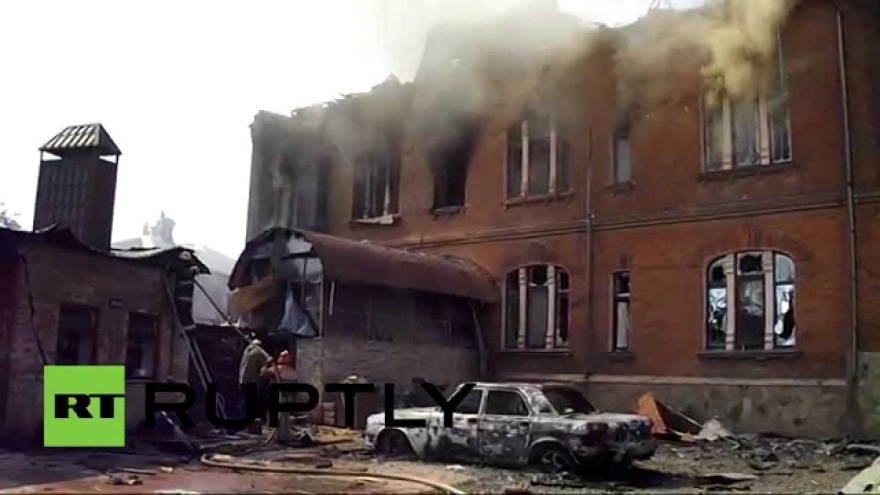 This message was sent by a girl from Slavyansk to a LifeNews journalist, Ermina Kotandzhyan (@JustErmina). They became acquainted in Slavyansk.

Hello, how are you? That’s it Ermina, you won’t believe it, but we’ve surrendered Slavyansk, we no longer hold this city, and we’re now in Donetsk… This is how it is, many guys died, and there were many wounded. The area where I lived was almost completely destroyed, together with my parents. So now I’m homeless. I’m an orphan, along with my sister; I managed to get her out—she’s nine years old. I don’t even know what to tell the child: that she now has no father, no mother, no grandmother, no uncle… It’s only me left…

« DPR and LPR Militia Briefings, July 6, 2014
Forgive us for not dying in Slavyansk »