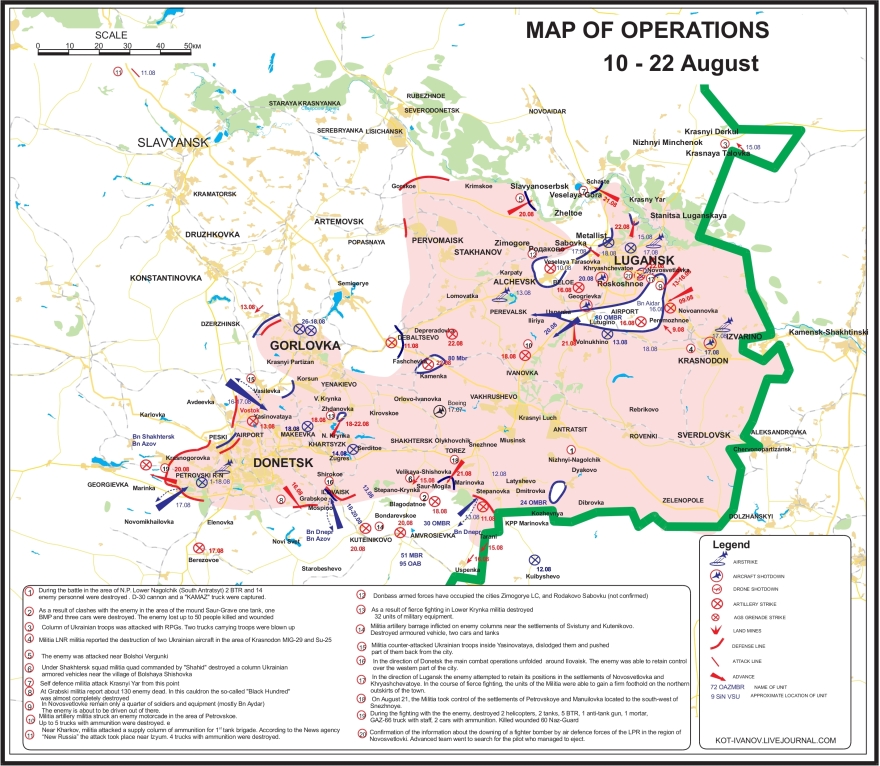 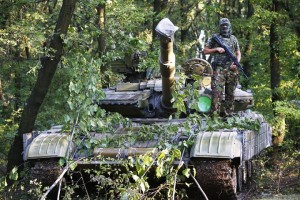 The map of the hostilities continues to change in favour of the Army of the South-East, as the Militia continues to win local and positional battles. The battles in Novorossiya, especially in Lugansk and Donetsk, are becoming more and more violent. The Ukrainian army initiated military operations on all the battlefronts on August 20th. The cities of Novorossiya have been exposed to massive artillery strikes. Ukrainian units reported part of Lugansk taken over; however, a successful Militia counterattack proved these reports to be premature. A similar situation took place in the suburb of Donetsk – Yasinovataya, where the enemy was thrown back, incurring serious losses. Unsuccessful attempts to take over Ilovaisk led to the same consequences. Meanwhile, intensive artillery and aviation bombardments of Donetsk and Lugansk have continued.

Target: to demolish the cities’ infrastructure (including water supply, gas pipelines, substations taken out of commission), which would lead to panic and demoralization among the people, thus reducing their ability actively to resist. 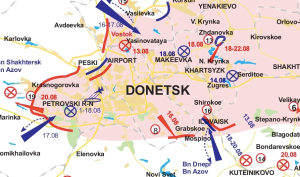 Donetsk as well as Makeyevka, Mospino were massively bombarded. School #151 burnt down, multiple instances of destruction are present in uptown Donetsk. There are up to ten casualties among Makeevka civilians, number of injured has not been reported. Railway station building damaged. Water filtering station in Olkhovka disabled on purpose, thereby part of Khartsyzsk and Zugres were cut of water supply.

Khanjenkovo was attacked. Strikes were reported at the railway station, the water reservoir, and the court building. Trudovskaya mining village in Petrovsky district of Donetsk was subjected to gunfire. The Army of Novorossiya conducted shelling of Saur-Mogila and organized the firing encirclement of the enemy near Amvrosievka. Artillery and mortar strikes were inflicted on the enemy positions in the area of Luzhki-Petrovskoye-Kuteinikovo. Exchange of weapons fire took place near the Blagodatnoe village. 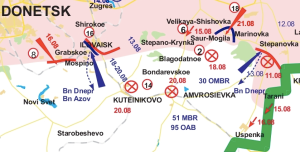 Main events unfolded at the south-east from Donetsk, in the settlement of Ilovaisk. As a result of these battles, the Ukrainian forces here constituted out of a composite group and the units of Battalions Donbass and Dnepr-1 unit was surrounded and exposed to massive shelling by the Army of Novorossiya. Spare Ukrainian army units were rushed through there, in particular – Battalions Azov and Shakhtersk, as well as ZSU units (17th Tank and  93rd Mechanized Brigades). As a result of fierce fighting, a tank company of the 17th Tank Brigade, the aim of which was to break the Ukrainian troops in the suburbs of Ilovaisk out of encirclement, was mostly destroyed, and the composite company of the 93rd brigade was encircled in the town with the rest of Battalion Donbass. Three BMP companies of the 51st Brigade – were mostly destroyed and scattered. Nothing is known about the fate of the 5th company of Battalion Dnepr-1  and the 2nd platoon of Battalion Azov.

By the end of the day, Ilovaisk was almost entirely liberated from the Ukrainian forces and controlled by the Militia. Motorola’s unit captured many battle trophies. Ilovaisk is an important center of resistance for the DRP.

Ukrainian army target: to “hack through” the eastern line of defence from Donetsk and siege the city by encircling as much of the surrounding area as possible. Cut the supply lines and transporting connections among the neighboring cities. 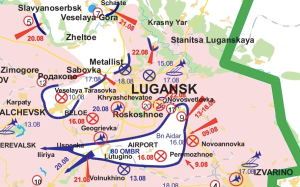 During the day the Ukrainian military continued shelling the suburbs of Lugansk. Over a period of 18 days people have been forced to live without electricity, water supply, mobile and landline phone network. According to citizens’ reports, apartment buildings at Lenin and Gradusov streets suffered damage caused by artillery shelling. The enemy concentrated major forces on holding its positions in the area of Cheluskinets, Khryashchevatoye, and Novosvetlovka settlements. The airport remains encircled. Positional battles are taking place. LPR forces began assaulting Slavyanoserbsk, Lutugino, Veselaya gora and Krasniy Yar settlements. The Novosvetlovka battle is going on. Militia is also holding the defense of Stanitsa Luganskaya and Vergunki.

Ukrainian military target: to take the control over the supply line, traffic artery connecting Lugansk and Izvarino check-point, which is to be used for humanitarian supplies transportation.

First let us consider the situation from the “bird’s eye view”. The Junta’s attack has completely lost all sense. The last attacks on Ilovaysk resembled random convulsions rather than a part of a sensible plan. Taking control of Ilovaisk would have made sense if it had been coordinated with a blow to the north of Donetsk. But the blow in the north had already been parried three days before that, so the frontal attack on Ilovaysk made no sense. We can say the same about the Junta’s other operation to the south of Lugansk. It would have made sense “to surround” Lugansk before the Southern Cauldron was defeated (at the beginning of August). And all the forces used in this operation were available at that time as well. However … we can only shrug quizzically. As Strelkov said, “the decisions of the Ukrainian command can nonplus anyone” (there almost no other explanation for their actions other than obvious sabotage).

It seems that there is a decisive battle being played out now to the south of Donetsk (Ilovaysk-Saur-Amvrosiyevka-Uspenka). The winner gets the initiative and operational freedom. The Junta has sent to the fight its last reserves in this area (the 28th brigade), as well as the reserves received during a realignment of the forces (parts of the 51st and the 93rd brigades). Dispatching to the battlefront divisions poorly composed of mishmash platoons and different companies gathered from all around the front line (Ilovaysk) rather than sending entire brigades (with the exception of the 28th Brigade that was entered into battle a little earlier) indicates the lack of operational reserves. In other words, there are no reserves in the south (not including the territorial battalions, because they only serve to instil chaos and panic, rather than benefit the operations). If, as a result of this fighting, the Junta’s southern group is broken (and that is where it seems to be going), they will have nothing to cover the gap in the defence after being defeated until the reserve units are made available by the third wave of mobilization (not earlier than in 2-3 weeks), and then fortifying Mariupol becomes a good alternative.

Near Lugansk, the situation for the Junta is also quickly coming to a catastrophe. The plan for the close envelopment of Lugansk failed. As a result of multiple days of fighting, the grouping of the 80th brigade, having circumvented the city along the border, and after crossing the Severskiy Donets river, was cut off (just as it was done with the Southern Cauldron). The Militia immediately took advantage of the weakening of the enemy forces to the north of Lugansk. The aim of the counteroffensive is to push the Junta’s troops over the line of the Seversky Donets river, and then to defeat a set of cauldrons around Lugansk, using the freed-up reserves for the purpose. Yesterday’s combat for Slavyanoserbsk and Vesyolaya Gora has shown that this operation is going well. An enemy armored group made a breakthrough in the direction of Krasniy Luch (Malonikolaevka) this morning. This may also be an attempt to get out of the encirclement by breaking through to the Debaltsevo area, getting the last battalion of the 30th Division out of the pocket along the way. However, it can be a separate operation as well, but, in this case, it is even more idiotic than the previous breakthrough of a few  battalions into this very area, which lead to their complete defeat. 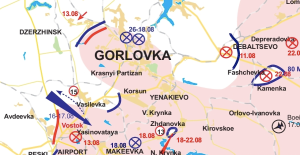 In the area of Gorlovka-Debaltsevo there is an operational pause. The Militia is trying to deal a final blow to the units of the 30th Brigade encircled near Fashchevka and to liquidate the consequences of the last breakthrough of the 95th Brigade to the area of Zhdanovka-Yasinovatay-Nizhnyaya Krynka. The Junta’s forces are simply trying to hold their positions because of lack of reserves.

The prospects. The suicidal attacks of the Ukrainian military intended to achieve a victory by August 24th foreseeably have resulted in enormous losses in manpower and military hardware. Having chosen the tactics of strategic defence, the Militia have almost exsanguinated the enemy units and therefore now have fairly good chance to take over the initiative. In the south there might be an offensive aimed at liberating Amvrosievka and Starobeshevo. Further operations will be planned in accordance with the evolving operational environment (it is too early to plan yet). In the north of Lugansk the line of the Seversky Donets river should be reached and all the cauldrons will then be purged. Then …We will see.

The Junta’s available forces. I believe that after my overview we have reasons to consider the 25th and the 51st Brigades almost completely defeated. The 28th Brigade was engaged in the fight near Saur and has already sustained large losses, while the 80th Brigade is carrying on heavy fighting in the south of Lugansk. The 95th Brigade sustained further losses near Gorlovka. The 128th Brigade (without the mountain rifle battalion that was swiftly sent to the Transcapathia) and the 92th Brigade (one of its battalions is surely near Kharkov; there is no information about the others) are relatively new. Why do I consider only regular units of the Ukrainian military forces? Because all the rest (other than maybe Battalion Aidar) are second-rate units which have no capacity either for attack or for persistent defence (only punitive sweep operations are within their depth). Therefore, I do not assess the manpower of the Militia and the Junta as others do. When calculating the Junta’s “forces” I do not take into account the units of the Ministry of the Interior (all the investigation officers, patrol units, traffic police inspectors – they are not proper military units) together with all the territorial defence battalions. As we can see, in practice, they can do absolutely nothing. What we should take into account are the units of the Ukrainian military and the “volunteer” battalions, and this calculation shows that the Junta has hardly any manpower advantage anymore, let alone advantage in troop morale …

The communication lines. I would like to highlight the fighting over the lines of communication, which both parties have been actively carrying on. Recently a radical turn has also become obvious in this regard. As a result of the various cauldrons and breakthrough being “cleansed”, the Militia has almost won back its lines of communications (other than near Lugansk). As a result, they have been able to manoeuvre their forces more efficiently by taking the advantages of the interior operational lines. Since last week there has been a real breakdown at the Junta’s rear. An obvious case was the recent capture of the chief officer of the 8th Army Corps reconnaissance party. Another example showing their rear to have gaps is the defeat of an artillery fortified area by one of Bezler’s saboteur-reconnaisance groups (“SRG”), as a result of which the Militia secured MLRS “Uragan” and 240-mm mortars “Tulpan” trophies (and even managed to take them out). In other words, the Junta’s front line is collapsing in front of our eyes. I do not even take into account the southern SRG raids to Uspenka, Amvrosievka, Kuteynikovo and many other areas. Storming garrisons deep in the rear twice per week with perfect impunity (to wit, the “Uspenka” border-crossing checkpoint) is already significant.

« General Ruban: “My job is to free people from all sides.”
The View from an Operating Room – a Slavyansk Surgeon Speaks »