Spanish ‘Brigadistas Internacionales’ in the Donbass

“If there’s anything in this world that resembles the International Brigades that helped our dear Spain in 1936, it’s the Vostok Batallion”

Flag of the Second Spanish Republic

Much has been said since the war started in Eastern Ukraine about the foreign mercenaries fighting alongside the Ukrainian Army and National Guard, but it is the presence of two young Spanish volunteers on the side of the rebels that has sparked interest in the Western media this week. Largely ignored by the Spanish mainstream media until they were interviewed by the France 24 channel, the news spread online, where it was picked up by the leftist parties of which both Ángel Arribas (twenty-two years old) and Rafa Muñoz (twenty-seven years old) are members.

Coming from a country that lacks compulsory military service, these Spanish brigadistas are unlikely to provide the Vostok Batallion—denounced by Spain’s El País newspaper as the most feared and violent of the militias—any decisive help on the battlefield. But in spite of the language barrier, with Spanish Republican flag in hand and voicing the legendary “¡No pasarán!” slogan, Ángel and Rafa have become the faces to introduce the militia—and the Vostok Batallion itself—as a new version of the International Brigades. They have also got some attention from the Western media to boost the antifascist rhetoric that was present since the beginning of the war. “If there’s one thing in this world that resembles the International Brigades that helped our dear Spain in 1936, it’s the Vostok Batallion”, they say in an interview.

Flag of the Donetsk People’s Republic

Spanish journalists have been surprised by the constant references to the Spanish Civil War from the early days of the crisis in South-Eastern Ukraine, back when barricades were thrown up as the first APCs arrived in Slavyansk full of young soldiers terrified at the prospect of having to shoot those civilians who stood before them angrily demanding their surrender. The war had not yet started and the press saw only a mix of baseless fear and Russian induced paranoia.

Months later, as the number of civilian casualties steadily grows, the Kiev government has escalated not just the shooting war but also the existential dimension of the conflict. By branding entire populations as terrorists, talking about creating filtration camps for separatists, threatening to strip Russian of its status as the main language in the region or censoring certain Russian films or books, Kiev has ramped up nationalist rhetoric reminiscent of Spain in 1939 and raising fears that repression, cultural if not necessarily physical, is on its way.

In order to create a new identity for the country, Ukraine has opted for rewriting their own history to eradicate Moscow’s presence therein. As a symbol of their Soviet past, Lenin statues have to be demolished, even though the existence of Ukraine as a state is a direct consequence of Lenin’s policies. A single unified Ukrainian culture is necessary even if it requires crushing a part of the country that will not accept the eradication of its culture. 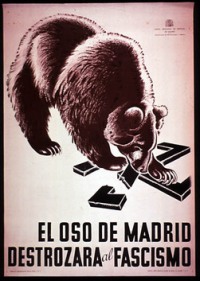 “The Bear of Madrid will destroy Fascism!”

The Donbass militias are fighting an uneven war, just as Spanish antifascists did in 1936-1939. Outgunned and outnumbered, their chances are slim without major outside intervention. Moscow has attempted to provide both moral support and political help, but their military contribution has not been what was expected after president Putin promised to be there if the Ukrainian Army threatened to kill civilians. In spite of constant talk of an imminent Russian invasion, Moscow could not make the political and military effort necessary to support those whom they have voiced support for and pledged to protect.

It is no mistake that Spanish Republicans have become the face of the international volunteers, who have slowly but steadily been joining the militias in Donbass. And it is certainly no mistake that, unlike in much of the West, the Spanish Civil War is still regarded in the former Soviet space as a turning point in the antifascist struggle.

The Soviet Union was one of the few countries who dared to help the democratically elected government against Franco’s uprising, backed by Nazi Germany and Fascist Italy. Their help may not have always been efficient and it certainly caused infighting within the Republican side; and it may or may not have been the case that the Soviet envoy, Antonov-Ovseenko, had revolutionary leader Andreu Nin killed for the alleged sin of Trotskyism. His body is yet to be found.

Hiding behind a Non-Intervention Pact, and terrified of the possibility of seeing red flags so close to home, European governments abandoned Spain in her time of need, even at the cost of losing an ally for the antifascist camp during World War II. They would eventually take refugees, but those were never given preferential treatment as they were in the Soviet Union or in Mexico.

Unlike their governments, though, a large group of mostly unprepared young men and women did come to the fore and enlisted in the International Brigades, the only help that came from within the Western democracies. Many of them never made it home. Later on, in their footsteps, Spanish antifascists responded to the call to fight Nazi Germany once again. Many joined the much idealized French resistance and were sent to the front lines only to be abandoned yet again once the war was over. The Western democracies lived alongside a quasi-fascist regime until 1975. Unlike them, some other countries like Mexico, who never recognized the Franco regime, and the Soviet Union, who blocked Spain’s membership of United Nations until Stalin’s death, continued to support the Republic.

Reviving the “¡No pasarán!” slogan and using a very similar rhetoric to that once used in Spain, the Donbass militias are fighting an army and a National Guard with battalions that make no attempt to hide their fascist symbols and ideology. And once again, European governments and the media that serves them choose to look the other way when it comes to excessive use of force and possible war crimes of a government to whom they have pledged unconditional support.

The media silence about the atrocities of this war has not dampened the will of many to see things first hand. It should come as no surprise that Spanish volunteers have joined the Militia along with other foreign fighters, mostly from Russia and other former Soviet republics, to somewhat recreate what the International Brigades tried to do for Spain in the 1930s. Today, as then, thrill-seeking or idealistic men and women are willing to risk everything to fight for the life and freedom of a foreign country.

Irish volunteers of the “Connolly Column” at the Ebro Front, Spain

Despite the lack of major writers to idealize this war, Rafa Muñoz’s words clearly explain what these volunteers are after:

“I understood that the information was manipulated by the Western media. I decided to sell my car and head for Donbass to help this people that has fallen victim to the arrests, killing and bombardments carried out by the regime in Kiev. I’m fighting for social justice and freedom for the people”.

Their fight may be in vain, but reviving the memories of the antifascist struggle, not only in Ukraine but also in Republican Spain, is in itself—regardless of the outcome of the war—a small victory.

Kiev’s inability or unwillingness to reach a compromise with the part of the country that had democratically elected the illegally deposed President directly led to a rebellion which began peacefully and only armed itself after the government refused to acknowledge their legitimate concerns and instead showed their willingness to use force. These policies have created not just separatism but hatred among the population, which, as Spain very well knows, can take decades to heal.

A Veteran of the Spanish Civil War

« A Summary of the Situation in Embattled Novorossiya
Goodbye Moscow, Hello Moscow – March 1, 2006 »

7 thoughts on “Spanish ‘Brigadistas Internacionales’ in the Donbass”