Map: Positions of the Factions near Shakhtersk

The end of day on August 1, 2014 saw the Ukrainian army retreat in several areas of the front. Specifically, the Ukrainian military abandoned three border crossing checkpoings at Dolzhanskiy, Izvarino and Chervonopartizansk and retreated from Saur-Mogila, which it unsuccessfully attempted to occupy for several days. This is most likely related to the effective work of the artillery units of the Novorossiya Militia, as well as to the overall significant losses sustained by the Ukrainian army. In its turn, the Ukrainian army made attempts to take control of Krasnogorovka, Yasinovataya and Maryinka, and even, as usual, rushed to report that the assaults were successful. In reality, however, the units of the Ukrainian army that attempted to enter these settlements were repelled and, having sustained losses, retreated.

On August 1, 2014, artillery shelling continued in the districts of Donetsk. In the area of the Kalinin mine there was heavy smoke; in the areas of Shirokiy and Kirovskiy explosions could be heard. Heavy self-propelled artillery and howitzers were used in the strikes. Unknown (presumably a Saboteur-Reconnaisance Group (“SRG”) of the Ukrainian side) shot at the “Novorossiya” campaign tent in Donetsk, on Gornaya street, not far from the railway terminal. One volunteer died. On July 31, 2014, as a result of the actions of a Ukrainian SRG, Alexander Prosyolkov, leader of the Eurasian Youth Union of the South Federal District of Russia and Deputy Minister of Foreign Affairs of DPR, was killed.

Map: Positions of the Factions near Donetsk

Starting at about 13:00, the Ukrainian side commenced an offensive on the southwestern outskirts of Donetsk, coming from the side of the settlements of Pobeda and Karlkovka, using approximately forty armoured vehicles. In a sudden attack, the Ukrainian forces were able to take control of the checkpoint to the southwest of Maryinka. Simultaneously, an offensive on Krasnogorovka was also underway. The units of the Milita retreated directly into these settlements. As of 16:30, fighting was ongoing in Maryinka, and no information about losses had been made available. Around lunchtime, the units of the volunteer Ukrainian corps “Praviy Sector”, reinforced with military hardware of the 51st Brigade of the Ukrainian Armed Forces, appeared on the approaches to Krasnogorovka atop several armoured vehicles and were met by the militiamen. Having suffered losses in manpower and armoured equipment, the attackers retreated. Control over Krasnogorovka was retained by the Militia.

On the northern outskirts of Donetsk, fighting continues between the Militia and the Ukrainian military. In particular, the Ukrainian military attempted to take control of the northern suburbs of Donetsk – Yasinovataya. Their goal was to cut off Gorlovka from Donetsk. Tank units tried to occupy Yasinovataya, but the attempted assault was repelled.

In the area of the Donetsk airport, controlled by the Ukrainian forces, howitzer fire could be heard.

In the course of today’s artillery shelling by the Ukrainian army, the city of Pervomaisk seriously suffered, with numerous instances of destruction in the residential areas. It appears that the Ukrainian army is preparing a strike on the city, which is occupied by the Militia, from the direction of Popasnaya (to the west) and Lisichansk (to the north), with the intention to advance toward Stakhanov.

In the course of the battles for Shakhters, the 25th Brigade was almost entirely eliminated. It suffered not only large losses in terms manpower (at least 23 dead, while the number of woulded is unknown) and in terms of military hardware (30 armoured vehicles were destroyed, and 2 BMPs were captured), but also lost virtually all the artillery that was in its possession. Also on August 1, 2014, an exchange of prisoners took place – two captured militiamen were exchanged for two captured “paratroopers”. However, while each of the Militia’s prisoners left on his own two feet, the militiamen were returned by the Ukrainian army in very serious condition (it is highly likely that they were subjected to beatings and torture, and it is unclear whether they will survive or not). Following this incident, Strelkov ordered that no officer of the 25th Brigade is be taken prisoner.

It was also reported during the day that a column of Ukrainian tanks was advancing on Shakhtersk; however, after being shelled by the Militia’s artillery, the tanks stopped their advance and began to dig in.

Overall, fighting with the semi-encircled grouping of the Ukrainian Armed Forces continued in the Shakhtersk-Snezhnoye-Torez region. The remnants of the 25th Aeromobile Brigade, Battalion Dnepr-1 and supply units were ended up being surrounded. In the night of July 31st-August 1st, a battle took place in the settlement of Serditoye, located between the settlement of Zugres and Shakhtersk on the Donetsk-Snezhnoye highway. The Ukrainian military sought to break out of the encirclement with a column of armoured vehicles and infantry and also attempted to destroy the checkpoint of the Militia in the area of the Davidovka village by shelling it, but failed. At this time, the encirclement of the enemy’s grouping from the north is nearing completion.

Map: Positions of the Factions near Shakhtersk

To the south of the settlement of Snezhnoye, the units of the Militia continued conducting artillery strikes on the positions of the enemy in the vicinity of the settlements of Stepanovka, Saurovka, Amvrosievka (up to 5 different armoured vehicles and two stacks of ammunition were destroyed), Blagodatnoye, as well as near Saur-Mogila. Also, as a result of successful artillery shelling, the Militia destroyed an enemy military base near Elenovka, which housed MLRS units, howitzers, an ammunition depot, and enemy personnel. Over 90% of the armaments and personnel was eliminated.

At approximately 14:30 (MSK), near Shakhters, fighters of Motorola’s unit stationed at Checkpoint No. 20 on the Donetsk-Snezhnoye highway shot down a Ukrainian military craft (a Soviet-made Tu-143 “Reis”).

The 34th Kirovograd Battalion, deployed near Gorlovka, on one of the heights, is experiencing a serious lack of military hardware, bulletproof vests and footwear. A tank they have been provided does not have a working night-vision apparatus. Among 30 men they only have 6 bulletproof vests.

In the night of July 31st-August 1st, the units of the 1st Reconnaissance Company attacked an enemy checkpoint near the settlement of Andreevka, to the south of Donetsk. The checkpoint was eliminate. One tank and two BMPs were destroyed.

In the morning of August 1, at approximately 07:00 (MSK), the Ukrainian army conducted an airstrike on the settlement of Nizhnyaya Krynka (DPR), located not far from Khartsyzsk.

After multiple unsuccessful attempts to take control of Saur-Mogila, the Ukrainian army has retreated from this strategic height. Saur-Mogila remains firmly in the hands of the Militia.

Uragan MLRS and aerial bombs were used to bombard Lugansk. As a result of artillery shelling, the Ukrainian army destroyed two of the city’s electrical substations. Around midnight, the Ukrainian army conducted yet another mortar-artillery strike on the Yakira district of the city. There are multiple instances of destruction in various areas of Lugansk, including in the Artyomovsk and the Zhovtnevyy districts. The shelling caused several fires in at least eight separate locations. As a result of the shelling by the Ukrainian army High-School No. 4 and the supermarket “Lugan’” were damaged. An exploding shell shattered windowpanes in the building next to High-School No. 4 and damaged the façade of the building. A wall of the supermarket “Lugan’” was destroyed after being hit by a shell.

The numbers of killed and wounded are being confirmed. Lugansk continues to experience interruptions in the supply of electricity. Lighting is available in approximately 1/6th of the city (the regional hospital has electricity).

On August 1, at 18:20, a column of Ukrainian vehicles, comprised of at least 18 elements (primarily trucks), was noticed on the road from the Kharkov airport toward Balakleya.

Also on August 1, a column of Ukrainian military hardware passed through Kiev. The column included 8 trucks with infantry, with each vehicle towing a ZU-23-2 antiaircraft unit.

Two columns with six Uragan MLRS each, supply cars, and personnel passed from Zaporozhye to Donetsk. In the area of Mariupol, active movement of the columns of the Ukrainian army with Uragan MLRS was observed. In particular, military hardware was spotted near Berdyansk, coming from the side of Tokmak. The column was comprised of 15 units of military hardware, among which were several Uragan MLRS, ammunition and loading vehicles, a refueling vehicle, as well as one BTR and several transport trucks. And at 13:30, up to 10 ammunition transportation and loading vehicles (presumable 9T452, intended for Uragan MLRS) and two transport trucks passed through the settlement of Osipenko in the Berdyansk area, heading toward Mariupol. 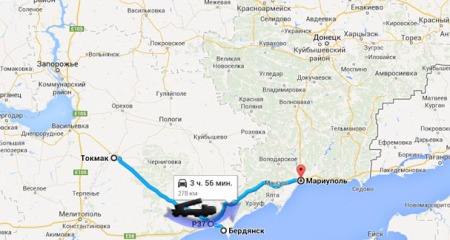 Over the last three days, in the area of Slavyansk, at night, regular sorties of the Ukrainian air force have been observed, flying from the Chuguev airport toward Donetsk (according to some information, no fewer than 16 flight-worthy aircraft are based there). From approximately 01:00 at night and until 08:00 in the morning, there are at least 10 flights over the city. During the day the flights are less frequent. They pass quite high, and can only be identified by the sound of the jet engines. First, a lighter aircraft passes (possibly a Su plane, perhaps something else – to draw the attention of MANPADS), followed by a heavy propeller aircraft.

At about midnight, coming from Karachun, there were two heavy volleys, separated by three minutes. Their direction is unknown.

Over the past day, 48 wounded fighters from the area of the punitive operation in Novorossiya were delivered to three hospitals in Dnepropetrovsk. Among them were paratroopers that were ambushed by the Militia near Shakhtersk.