Is Ukraine a Modern Day Colony?

by Andrey Panevin / The Barricade

Western nations like to pretend that colonialism was all but wiped out in the years following the Second World War. However, those who know better than to trust the accounts of the western ‘victors’ of WWII understand that imperialism is alive and well. Constant military and political interventions in Latin America, the Middle East and Africa serve to uphold American hegemony in the world. While the US maintains that these incursions into the sovereignty of other nations are in the interests of promoting ‘universal values’, such as so-called democracy and freedom, it is clear in the aftermath of such attacks that the opposite is true. Rather than improving the countries that the US (among other nations) invades, the outcome is often mass bloodshed and severe degradation of the quality of life for the lower classes.

The economically-driven genocide conducted by the United States in the Philippines (1899-1902) is an early and powerful example of such an intervention. A US Senator, speaking in 1900, summarized the American imperial stance at the time and effectively the manner in which it has operated ever since:

It has been charged that our conduct of the war has been cruel. Senators, it has been the reverse[…]Senators must remember that we are not dealing with Americans or Europeans. We are dealing with Orientals.”

Today’s western politicians would scoff at comparisons with the American policies of that time, but, as history shows, and, indeed, as current events reinforce, imperialism is alive and well. In 2015 there is no better example of US and western imperialism than the crisis it has created in Ukraine. From the complete abandonment of legal and political processes to the support of western Ukrainian ideology in a war against the East, the characteristics of colonisation are ever-present.

The Exploitation of Natural Resources 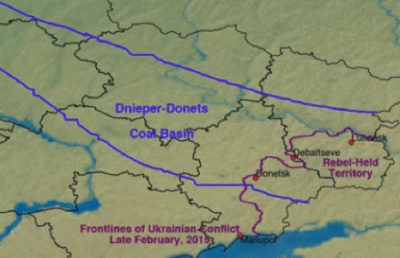 One of the driving forces of imperialism is the need to secure control of natural resources and the human labour with which to process it for transport to the imperial centers. The British Empire was the fullest expression of such exploitation, with everything from rubber and spices to slaves and oil being taken from their colonial outposts back to Britain, leaving poverty and cultural destruction in its wake.

Ukraine is rich with fertile soil, coal and oil, it is home to the largest reserves of sulfur in the word, the second largest deposits of mercury ore, as well as 5 percent of the world’s iron ore. Many of these resources are primarily found in the regions of conflict in eastern Ukraine/Donbass. These resources represent the interests of not only America and Europe but also of the Ukrainian oligarchs, who have greatly fuelled the war and exacerbated cultural tensions. The agricultural and natural gas reserves are of particular interest to the American and western European economies, whose own natural resources are exponentially dwindling.

In a move that highlighted the openly colonial nature of the US intervention in Ukraine, the son of the American Vice-President was appointed to the Board of Directors of Burisma, one of the country’s largest private oil companies. In fact, the entire Board of Directors represents a wide range of western economic interests and backgrounds. All were appointed in the time leading up to and during the crisis in Ukraine.

To see how much of Ukraine is being even further exploited, one needs only to take a look at the website of the Ukrainian Embassy in the United States, which is essentially advertising the nation’s soil, banks and real estate as being up for sale. The US Ambassador to Ukraine even posted a link to an article by NuWire Investor on how to invest in Ukrainian agriculture.

The Imposition of Western Culture

On July 4th, 2015 the United States was not the only nation celebrating the American Independence Day. In Kiev, thousands of Ukrainians also took part in festivities, which have no basis in Ukrainian culture or history. For a country that so fervently protests the fictional ‘Russian aggression’ against Ukrainian sovereignty, it was a scene of great and idiotic irony to see the Independence Day celebrated in Ukraine. For what purpose did the Ukrainian nationalists so passionately destroy their country? To fly the American flag, it seems.

This imposition of American culture in Ukraine extends past the general cultural degradation and into the training of the Ukrainian military and police forces. Just as approximately four million non-white soldiers were mobilised to fight for the colonial powers in World War One, the United States is looking to continue its fight for Ukraine and its resources down to the last Ukrainian. Not only does this training directly contravene the Minsk Agreements, but it also pushes Europe closer to an all-out war with Russia.

With the revocation of language and human rights for the people of Donetsk and Lugansk, as well as for much of the rest of Ukraine, Poroshenko and his colonial handlers have effectively exacerbated cultural and ethnic tensions in order to create conflict. This colonial tactic has led to a civil war that has destroyed Ukraine as a unitary nation and has allowed for the rapid resurgence of fascism as a major political and military force. Furthermore, the economic and military blockade of the Donbass has created a humanitarian crisis in the region that seems to take its inspiration from the punishment tactics used by colonial powers in India and Africa against dissenting peoples.

The granting of a privileged status to western Ukrainians has been done largely to appease the powerful fascist leaders who hail from those regions. Such leaders include Andriy Biletsky, the head of the Patriots of Ukraine group, whose statements could easily be mistaken for the rabid polemics of Nazis during WWII:

“Our National body should start with a racial cleansing of the Nation[…]a healthy racial body will revive[…]culture, language and everything else.”

“We must pay attention to the question of the value of race. Ukrainians are a part (and one of the largest and the highest in quality) of the European White Race.”

“The historical mission[…]is to head and lead the White Peoples of the whole world in the last crusade for their existence. A crusade against Semite-led subhumanity.”

The Degradation of Living Standards for the Lower Classes 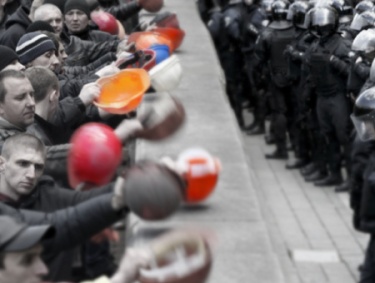 While Ukrainian oligarchs have benefited greatly by serving their European and American masters, the lower classes of Ukraine are suffering in conditions far worse than those that prevailed before the Maidan coup. In April of this year the price of natural gas increased by 285 percent, and then, in May, hot and cold water prices were increased by 71 percent.  In 2014, reports in the Ukrainian media stated that up to 30 percent of Ukrainians were unable to pay utility bills with the prices of medicine and food increasing by up to 200 percent. The already poor segments of the Ukrainian society have been subjected to even more draconian levels of poverty and state-imposed destitution. To top this all off, the working class is increasingly facing hardship, as salaries are not being paid in important industrial sectors, such as mining.

As ordinary Ukrainians find their living standards degrading, oligarchs, such as Poroshenko, find themselves reaching new heights of wealth. Despite promising to sell off his major assets and focus on restoring Ukraine’s prosperity, Poroshenko’s personal wealth has grown by at least by a factor of three since he took office. His role as a political puppet for America has paid off handsomely, and as Ukraine is cemented as a colony of the United States, such oligarchic wealth will only grow.

The Role of Foreign Clerks in Ukrainian Positions

In perhaps the most obvious sign of Ukraine’s status as a modern day colony, several key positions in Ukraine’s government and advisory councils are inhabited by foreigners. The finance minister is an American, the economy minister is Lithuanian, and the health minister is Georgian. All were granted citizenship just hours before receiving their appointments in the Ukrainian government. 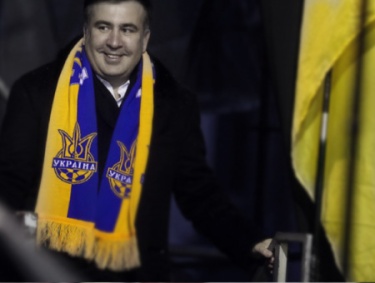 More recently, the governorship of the Odessa Oblast was given to Mikhail Saakashvili, the ex-president of Georgia, who is currently on the country’s wanted list. If this appointment of a foreign fugitive to govern the culturally Russian city of Odessa was not controversial enough, the United States has announced it will be directly paying his salary.

Saakashvili now will have to find extra working hours as he is also the head of Ukraine’s International Advisory Council. In this position, he works alongside the Swedish Russophobe Carl Bildt and an assortment of European politicians. John McCain was duly invited, but was required by Senate law to decline, much to the chagrin of Poroshenko and Saakashvili. This advisory council is entitled to report directly to the US Senate Foreign Relations Committee on matters such as ‘Russian aggression’.

Ukraine’s status as a sovereign nation has been all but nullified, but not by Russia, as the mainstream media reports, but instead by America and Europe. Every major aspect of Ukrainian politics, culture and society has been outsourced or simply overrun by western interests. The Ukrainian people have been marginalised into positions of subservience to western armies, corporations and the geopolitical ambitions of the West. The open colonisation of Ukraine has been overshadowed by the now-weary calls to protect Ukraine’s sovereignty by the same people who have done everything to destroy it.

« The Updated Military Strategy of the US: Ambiguity and Dominance
Turf War in Mukachevo »

13 thoughts on “Is Ukraine a Modern Day Colony?”