Andrey Stenin: I was trying to smile more…

“I was trying to smile more because of being frenzied by fear.”

Source article by TV-Zvezda.ru
Translated from Russian by Vera Van Horn / Edited by O.C. and @Gbabeuf

A special correspondence of KP, Alexander Kots, published excerpts from a diary of the deceased frontline photojournalist of the INA “Russia Today.” His remains, burned in a car near the village of Dmitrovka, were found by fellow journalists.

A WORD BY A COMRADE

In 2011, his powerful military report from the combat zone in Libya was published on the web site of “RIA News”. By that time, the photographer Stenin was widely known in a narrow circle of war reporters. But few could assume that he had a “scribbler” talent.

– Why did you quit scribbling?—I asked him.

However, every time when facing high emotional stress he took up the pen again. On his blog he used to write in a benign ironic way about the things, which were scary even to look at. After he passed away, Andrew left behind gigabytes of honest photographs. And hundreds of lines—genuine lines about war.

I am getting convinced more and more that the war should be filmed. I missed a half of story while merely changing the objective lenses. And what about the close shell whistle? And breathlessness rushes in bullet-proof vests—they are totally not photogenic, though it takes 90% of the time.

When nothing disturbs you, it is a good oppotunity to walk around, snapping pictures. Unlike, when we rush wildly in a jihad-mobile of “Motorola” directly to the dusty breaks from the tank hits—indeed, you start thinking about shutter speed, aperture, composition and other shit only after getting into the basement. But there is darkness and no plot to film.
How could you film the rain of incendiary bombs firing? I did not photograph it. And guys with cameras filmed a great video. Although it was during the day.
***

The most important thing in our profession is to take a picture of the mushroom cloud and to manage delivering the pics to the editorial board before the light and shock waves reach the world.

When it is “whe-ew”—“bang”—it is a mine or a shell that flew by and exploded behind you. And when it is “bang”—“whe-ew”—it is a mine that exploded nearby, scattered the debris, while you are sitting in a dugout, smoking a cigarette. And when you cannot hear anything—then it is over for you.

One more recent sign: if you accidentally hit your camera or camcorder with your foot, you should touch it with your hand as if you apologize. Otherwise it will break down at the most inopportune moment.

We arrived at a fishery farm. The day before, the Militia gracefully and briskly took over a roadblock. Tanks-shmanks, mortars-shmortars—all this makes no interest and no difference.

The first thing we see is an APC burnt in a pit. A filming session! Wildly excited TV men pop up and start pouring over everything with cameras. A bullet-proof vest—what on earth?! It is me, a cowardly boy, putting on the outfit, as I was always taught by my mother and father. Only then I start to walk around, pressing the button, fairly working off my subsistence allowance. I film each jar of pickled tomatoes, a hole-ridden pot, a cartridge case from three different angles, fashionable tents, hanging icons. Some trenches. I understand, the time is short. I just feel it with my throbbing ass.

All this time, the TV stars are still wildly staring at the slightly smoking APC.

“This is my friend Syoma Pegov. Do not be daunted by the blessedness of this picture. Fifteen minutes later, this place was shelled. Fighters were killed—simple and good guys. Respect red microphone. Respect our work.” Photo by Andrey Stenin.

Suddenly, some fuss begins in the outskirts. Something clattered beyond the forest. It is a music of war, damn it! A shell or a mine, thrown a couple of times, that strongly. I am hiding in the undergrowth, perching myself in the pits like a puppy. TV men run about like cockroaches under a muddy slipper—every which way. Not bloody likely! I tell myself: I do not expect to get TEFI, will run to the car—then we will see.

We are tearing around through mud. The engines roaring, guzzling oil, valves chattering—pit stop is a long way off. Prize-winners are sprinting ahead. We are trying to catch up and pick those poor wretches. Not likely! Running at full speed—no chance to catch them! Without armor, light—hands down! One stumbled over a wire of UAF and ploughed up black earth with facial pulling. It is terribly funny, but somehow not funny for us.

In the morning, disarrayed villagers run with buckets to a pond covered with duckweed, which used to serve as a swimming pool. They cook potato, eat it with bacon. Semen Pegov washes his stylish shirts and trousers in a zinc bucket, after shredding there a piece of gray soap. Occasionally, overseas visitors come—the reporters with brand new cuirasses—and then, all the residents pour out to see such a wonder.

In the evenings there are shrill quarrels over women. The correspondents in greasy overalls bustle around in the yard, just resembling Nozdryov (A famous character of “The Dead Souls”—a novel by Russian writer Nikolai Gogol—edit.), and brawl with careless service staff. Cabage soup simmers on the stove. In the apartments, people read posts on Facebook with candlelight. Mikhail Fomichev grudgingly writes poetry. Swallows cheep. Carriers leisurely discuss where to get oats, i.e. gasoline.

Definitely, the most conscientious ones are likely capable of betrayal. Those photojournalists, who feel like they are hired landsknechts, are reliable enough: because they touch the ground, they know what the common touch is, they have no rotten illusions, they know that we are all made of flesh.

Whereas, ideologues are truly dangerous. They are in the clouds, and they value human life less than the Grand Prix of the photo contest.

During the war in Ossetia, one colleague accused us of eating a tinned stewed meat in front of the starving inhabitants of Gori. He was very scrupulous. He did not ask, when was the last time we ate before that, and, of course, he decided by himself, how much the residents of Gori were starving.

The other fellow—right here—refused to shelter a guy who was in a real danger. It is a pity.

ABOUT A FALLEN COLLEAGUE

That Italian reporter, who was killed yesterday—I met him once in Libya.

Here is what I wrote three years ago:

“Two photographers, like bugs, were crawling over the hill, trying to film submachine gunners, seated in the pits on the top of the hill. They did not even shoot, because they were under fire by the tank.“It is not my war”—An Italian told me. “What the hell are we doing here”—I joked in response to his joke. That day, I was trying to smile more, because I was frenzied by fear.

We ran. Then, we returned. Then, we ran again. The Militants were acting similarly. The war was tiresome. I was longingly watching the sun rolling over the horizon. I could not photograph at night, and it would have given me the right to run away once and for all.”

Slavyansk lost its heart without water and electricity supply. We ended up in the encirclement of lice and diseases. At the beginning, we used to bathe in a pool, but from tons of unwashed bodies, the bathing hut got infested with algae and fat toads and crocodiles.

Anybody and everybody swore, he or she personally saw the electrical repair crews around, and even the crocodile hunters with large nets. We were waiting and hoping, meanwhile, washing the feet with Borzhomi and cleaning the toilets with cream.

Nowadays Slovyansk is a zero-city. Occasionally, a red microphone rustles along a dark streets, and again—nothing… Hollow.

We were saved by a miracle. It was a real wonder and a great luck. We were the last ones to leave.

Shortly before the tragical loss, Kiev has accused the Moscow photojournalist in the torture and murder of a Ukrainian prisoner of war. Yet the soldier in question is still alive. 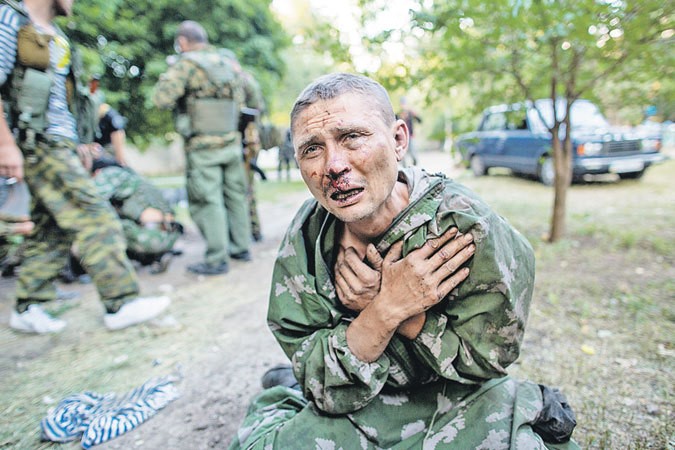 On July 31, near Donetsk, Andrew was ahead of everyone else, during a scouting patrol with the Militia. Following the combat, he paused by Andrey Panasyuk, a Ukrainian paratrooper, who had stepped on a mine. The soldier was on the ground writhing in pain—shrapnel had wounded his back and severed a toe. Andrey took a series of photographs of the soldier, and sent them to his editor. They turned out to be among the last he took. Seeing those pictures on the Internet, Ukrainian security officials were quick to announce that Andrei Stenin was “involved in the torture and murder of a Ukrainian soldier.” Moreover, one of the pictures led Panasyuk’s commanders to conclude that he had been killed following the interrogation.

A few days later, though, a video surfaced showing Panasyuk having his leg sewn up. It turned out that Panasyuk, “brutally tortured” by the Militia, was alive and was recovering. In search for Andrei, the Moscow journalists visited the hospital where Panasyuk was treated. After all, he was one of the last to see Stenin alive. There was a theory that Andrei might have been hunted down because of those pictures, and this theory was also checked.

Maria, the Ukrainian soldier’s mother, said that she had learned of her son’s injury by accident: she was shown the video on the internet, taken during her son’s interrogation, and thus came to learn that he was alive. Panasyuk was exchanged for Militiamen, and she found him in the hospital. The Moscow journalists suggested Panasyuk write a letter to Andrei’s mother. The paratrooper mastered seven lines.

“To the mum of Andrey Stenin from Andrey Panasyuk, a soldier. I want to tell you about your son. Although I hardly remember the moment when I got wounded, but your son did not hit, nor torture me, he was just doing his job as a photographer. I’m sorry that it happened this way. I think that one day there will be peace.”

The team of SLAVYNAGRAD.org also sends condolences to the family of the fallen photo correspondent. RIP.

« The Tragic Anniversary of Talerhof
“The March of Heroes” »

One thought on “Andrey Stenin: I was trying to smile more…”