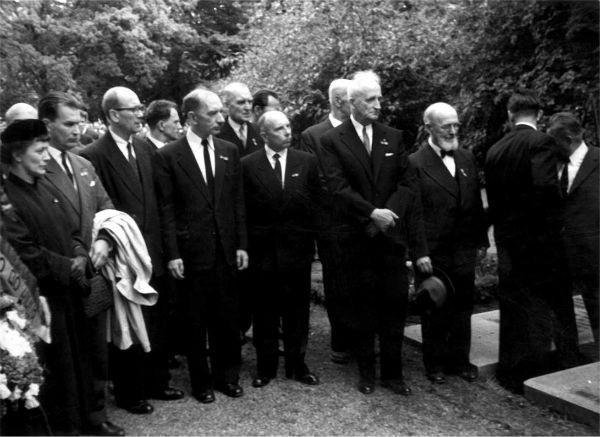 The American support of contemporary Ukrainian fascism albeit shocking is in fact not a new political phenomenon. Documents declassified by the CIA under a FOIA request entitled The NAZI War Crimes Declassification Act show that not only was the CIA monitoring Ukrainian fascist groups during and after WWII, it was also actively aiding them and protecting them from prosecution. These and other documents can be found in the CIA’s Freedom of Information Act Electronic Reading Room. The following documents are but a few of the many that pertain to America’s protection of war criminals the world over.

Stepan Bandera, who was the leader of the OUN (Organisation of Ukrainian Nationalists), is a man revered by the current Ukrainian authorities and seen by the fascist Ukrainian battalions as a national hero. Both western politicians and the mainstream media have worked hard to obscure his role in Ukraine’s history of ultra-nationalist and fascist movements. He was, in fact, a ruthless mass murderer whose wartime atrocities can only be viewed as crimes against humanity. With his wholesale rehabilitation in Ukraine, the anti-fascist opposition has taken to calling his supporters ‘Banderites’ and their actions ‘Banderism’.

Stepan Bandera’s legacy not only benefits from the ignorance engendered by today’s corporate media and politicians; he also, from the years of the Second World War up until his death, personally benefited from the aid of the American government. Not only was he protected from the justice of the Soviet Union but he also enjoyed the ability to ask for Washington’s help in such matters as obtaining visas and secret accommodation. 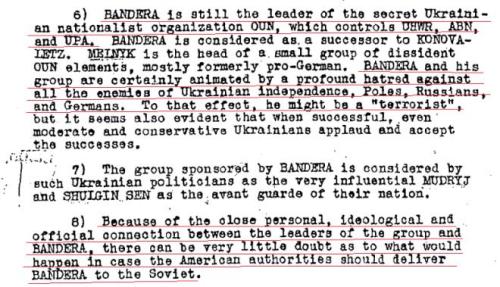 The CIA was acutely aware of Bandera’s fascist views but they understood that if he was captured by the Soviet Union he would not be accorded the same mercy that was granted due to American interests in post-war Europe. The following series of images details the lengths to which the CIA went in order to keep Bandera out of Soviet hands and to further avoid branding him a ‘war criminal’.

The US government’s assistance to Stepan Bandera extended up until the year of his death (1959), as the following image shows. Bandera himself knew that matters such as the granting of a visa could only be achieved with “Washington’s approval”. 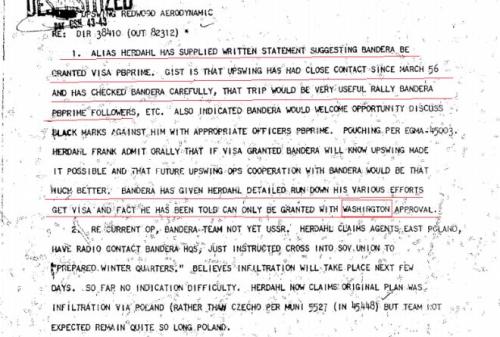 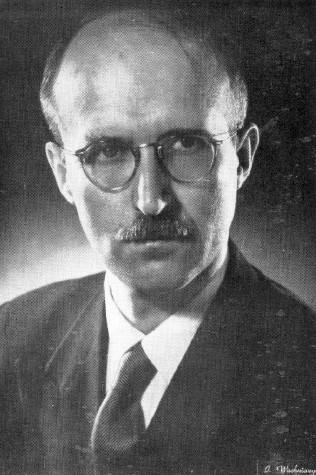 Yaroslav Stetsko was a prominent figure in the OUN and its leader from 1968 until his death in 1986. Stetsko’s book, Two Revolutions (1951), also provides one of the bases of the ideological platform of the ultra-nationalist party ‘Svoboda’. Stetsko’s relationship with the CIA and the US government is extensive and stretches from his time in the OUN with Bandera until his death in Munich. The following images show that Stetsko was constantly receiving information from UPA and OUN members within Ukraine and relaying it to American contacts. 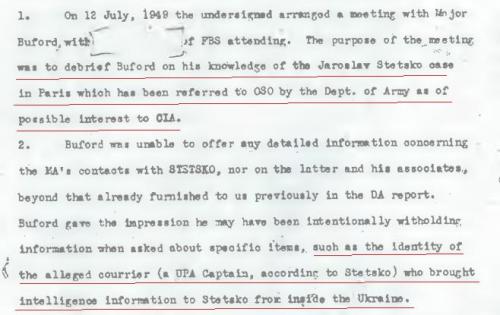 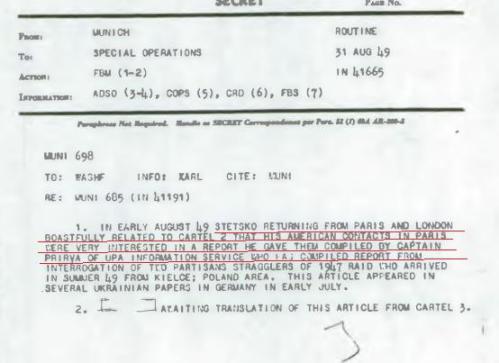 Stetsko not only provided information to US authorities about the situation in Ukraine, but he also enjoyed the confidence of Allen Dulles, the director of the CIA at the time. As the letter below demonstrates, Stetsko—as president of the ‘Anti-Bolshevik Bloc of Nations’—advised the CIA on how to utilise nationalism as a “potent force” in European affairs. 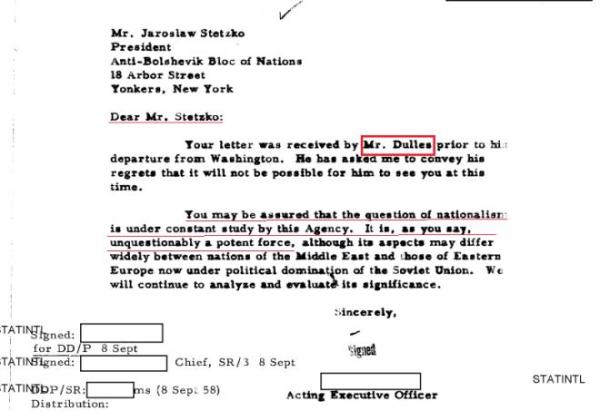 Another document further proves that Stetsko and other ‘Banderists’ received support not only from the US, but from the British government as well.

Mykola Lebed was a prominent Ukrainian fascist whose desire to “cleanse the entire revolutionary territory of the Polish population” led to scenes of unimaginable violence:

“…(UPA) are not discriminating about who they kill; they are gunning down the populations of entire villages… Since there are hardly any Jews left to kill, the Bandera gangs have turned on the Poles. They are literally hacking Poles to pieces. Every day […] you can see the bodies of Poles, with wires around their necks, floating down the river Bug.” ―Hitler’s Shadow: Nazi War Criminals, U.S Intelligence and the Cold War

There can be no doubt that, among the Ukrainian fascist war criminals, Lebed was one of the most sadistic and ruthless. This makes it all the more shocking that he was continuously protected by the CIA until his death. Such was the protection that he received that Allen Dulles personally shielded him from facing justice. Dulles wrote a letter that not only allowed Lebed to enter the United States but vehemently denied his role in the 1934 assassination of the Polish Minister of the Interior and his collaboration with the Nazis in WWII.

The CIA constantly monitored Lebed and did everything in its power to avoid the truth about his past being exposed by journalists or the Department of Justice. Furthermore they reveal collaboration between the CIA and elements of the OSI (Office of Special Investigations), indicating that the two departments worked together to keep Lebed’s past from being revealed by their own department.

These documents, among many others, show that the American government has supported and protected Ukrainian fascists and war criminals long before the ‘Orange Revolution’ or ‘Maidan’ in Ukraine. These years of supporting Ukrainian fascism have allowed the US and its allies to hone their sordid skills to perfection, to the point that, in 2015, an openly fascist Ukrainian government is terrorising those that it considers undesirable and spewing hatred at its ‘subhuman’ Russian neighbours. In the meantime the mainstream press and their western paymasters will continue to promote the easily disproved fallacy that “there are no fascists in Ukraine”. Not only are there fascists in Ukraine, but they also occupy the highest levels of the American government and its agencies.

« War In Our Time
Whitewashing Bandera for a US Audience »