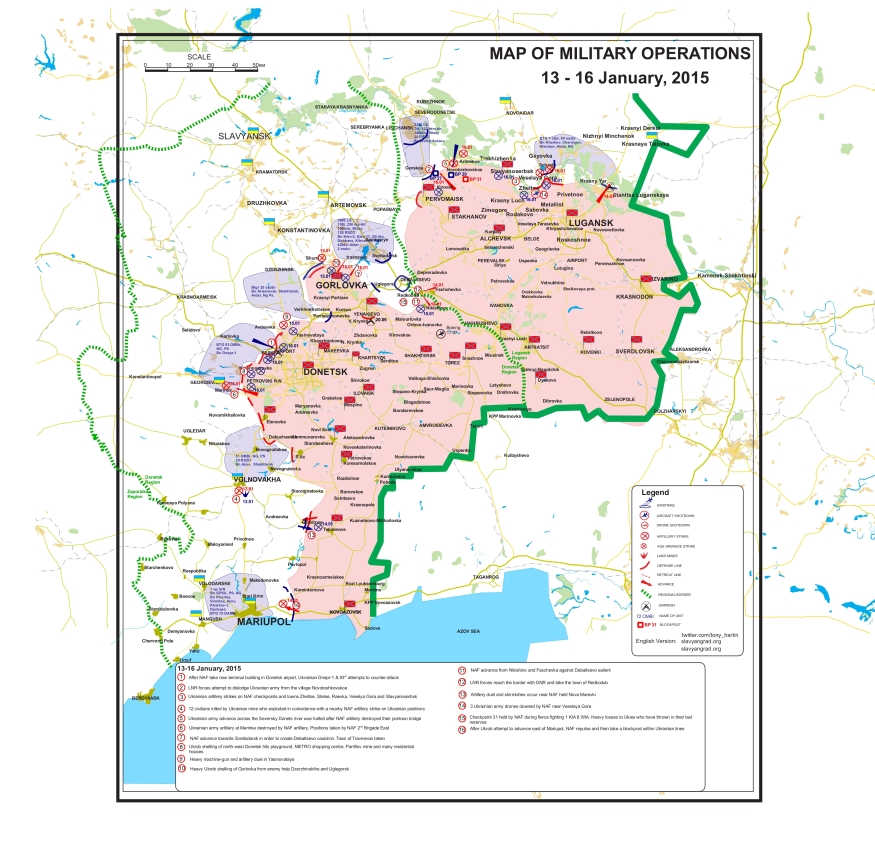 The beginning of a new phase in the war has become a fact in the Donbass. Nobody can talk about any violation of the ceasefire regime–the ceasefire has been simply dismissed. Ukrainian propaganda speaks of retaliation by the punitive forces who have been forced to respond to the seizure of the airport. However, it is difficult to use this term for such a massive bombardment and mass troop and armour offensive by the military—it was prepared long in advance.

In fact, Kiev simply provoked the Militia to capture the airport, constantly hitting residential districts in Donetsk, killing, according to various estimates, around 300-350 civilians from September onwards.

At any rate, the second stage of the war has become a reality. Now, both the punitive troops and the Militia must prove that they have used the duration of this strange truce to their benefit.

The UAF offensive is running along the same lines as the summer scenario, not because Ukrainian generals are stupid—but rather because the configuration of the front line leaves no other options. There is one—operational encirclement of Donetsk by flanking it in the Snezhnoe area and by a tactical seizure of Yasinovataya, Makeevka and Khartsyzk. Cutting the Militia off from the border, as in the summer, makes no sense. It would be enough to cut off the supply and to attempt to hold the situation for at least two weeks. Intense fighting will deplete ammunition, and without replenishing it Donetsk simply will not hold out.

Russia, continuing to adhere to the denial of its presence and to recognition of the “unity of Ukraine” will be forced to stick with it. Changing this position requires a very serious study of the consequences, for which there is simply no time now. Apparently, the Minsk “peacekeepers” did not even consider the possibility of a transition by Kiev on to the offensive and thus expected that the rather demonstrative build-up of Militia forces would in itself hold the junta back from large-scale hostilities. Thus, the Kremlin does not demonstrate anything that could be described as advance planning. Another “terrible Russian silence” has begun, or rather—in Moscow they do not know what to do. Quite pathetic statements and concerns—purely reflex actions that are typical for Russian politics as a whole.

Evidently, there will be implemented the same reflex momentary plan for holding positions and thus positionally defeating the advancing punitive troops. Without a plan of attack the game is on defence—a sure path to defeat, but nothing else appears to be available.

It is not quite clear how the different groups of the Militia will behave. Judging by today’s breakthrough of several tanks supported by infantry at the Putilovka bridge, they were able to break through the Spartak area [a district of Donetsk -ed.] in the Vostok Battalion’s zone of responsibility. Again Khodakovsky and again the airport. There are also reports from Yasinovataya, which is also under the control of Vostok, that not everything is all right there. Despite the fact that the Militia is fighting bravely, questions arise as to their commanders, as they did in the summer. [The attack through the Putilovka Bridge has been repulsed by now -ed.]

One can expect for a while exclusively defensive actions from the Militia in Donetsk and possibly diversionary attacks in other directions to force Kiev’s commanders to hold back their reserves. However, when such tactics bring the whole situation to a “slackening”—it will be enough for the punitive troops to be successful in any of the areas, and then no diversionary attacks will help—everything will be thrown into the breakthrough.

It is somewhat naïve to count on the fact that the Militia will wear down the enemy in defensive battles and then go on the offensive—not for that did the Kremlin rigidly halt the offensive in September, only to allow it, for some reason, in January. The goal remains unchanged—to pass the Donbass under the control of Ukraine, at any price, but with a pro-Russian administration. Actually, now people are being killed just for Zakharchenko and Plotnitskiy to become Ukrainian governors. If it will not be them, it will be someone else. Personalities are not important—functionality is.

Kiev is not satisfied with such an approach. Strictly speaking, this was why the situation became aggravated. Currently there are no signs that Kiev and Moscow are ready to resolve the problem at a stroke, so if the punitive troops do not achieve any decisive progress within a week or ten days, the intensity of the fighting could seriously decrease. Then again will be declared an incredible victory—a return to the peace process. Until the next exacerbation.

The only thing that the Militia can try to achieve in this situation is to take the fortified area in Avdeevka, Peski and Opytniy and push the enemy artillery from the city for the next “ceasefire.”

In the meantime, in addition to the shelling more unpleasant news arrived for the people—the Akhmetov Foundation suspended the delivery of humanitarian aid. Until the situation is clarified.

PS: A letter from a friend in Donetsk. Just that: “…was just stopped in Khartsyzk by a joint traffic police and military commandant outfit. Familiar fighters from the military commandant’s office said that there are sabotage and reconnaissance groups in the city. They are firing at cars. Eight dead bodies…”