There has been no assault on Lugansk as such. Following an unsuccessful attempt immediately to take Khryashevatoye, where street battles unfolded, a part of the advancing forces went on to flank the village and entered the suburbs of Lugansk from the south, and that is where sporadic clashes started taking place because here the factions did not have troops sufficient for taking control over southern suburbs. The Junta reported that it occupied a part of Lugansk, while the LPR Army reported that it was sweeping and purging the Junta infantry that seeped into the city. In reality, here there are ongoing urban battles of medium intensity, as the sides do not have that much heavy weaponry in this area. Overall, here there is no direct threat to Lugansk.

The highway in the area of Novosvetlovka at this time has not been fully unblocked. The LPR Army continues its attacks, but is unable to knock the enemy out completely yet. The expectations that it would be possible to drive the Junta away from the highway in two days turned out to be too optimistic, and it is clear that far more significant efforts will need to be made here. The convoy is stopped first and foremost because there is no physical way to get to Lugansk. That is the cause of the fierce attacks on Novosvetlovka by the LPR Army. The question of completely unblocking the highway has not only military, but also political significance.

Yesterday in Stanitsa Luganskay there were street battles. The Junta traditionally hung its flag somewhere and declared the town was taken; however, street fighting continued. Militiamen retreated to the dominant height nearby the settlement and closer to the evening returned to the town and resumed fighting. It cannot be said at this time that the town is controlled by either of the factions. In principle, given the configuration of the front line, Stanitsa Luganskaya has little effect on the possibility of encirclement of Lugansk or on the fight for the border. However, having suffered a number of failures, the Junta desperately needs at least some victory, and yet, even here, it is unable to achieve success. By the looks of it, here we can observe an attempt to change the tactics of the punitive operation in the LPR in accordance with Poroshenko’s statement, involving, specifically, the resumption of battles aimed at taking control of the border. In the medium term, in the event Stanitsa Luganskaya is taken, the Junta may attempt to resume its offensive on Izvarino from the north. The Junta’s prospects here are very vague in light of the catastrophic failure of the last such attempt. [Note: latest information indicates that Stanitsa Luganskay was not taken and that the Ukrainian army was driven out of the town].

In the area of Alchevsk and Stakhanov, the LPR Army firmly holds key positions. Notwithstanding the Junta’s lies, Pervomaisk continues to remain under the Militia’s control. The city is constantly being shelled, but direct attacks against it remain unconvincing. It appears that here the Junta does not have sufficient troops for more active operations. Judging by the resumption of active operations in the area of Stanitsa Luganskaya, some of the troops that were freed up after the Lisichansk Protrusion was cut off were redeployed to the northern front of the LPR in order to create an assault group, which is now advancing on Stanitsa Luganskaya.

In the area of Debaltsevo, sluggish combat operations continue, fettering some of the Junta’s forces. These maneuvers enable further activities aimed at defeating the surrounded 30th Mechanized Brigade. Here the Militia does not have large forces sufficient for an assault on Debaltsevo, and the enemy has a serious advantage in armoured vehicles and artillery.

The Lugansk airport is still blockaded, something which is confirmed by both sides. The resumption of hostilities in other sections of the front has permitted the Junta to shoot some video at the location. The LPR Army’s artillery is now engaged in other areas and is not particularly concerned about the airport at the moment. The fact that the airport still has not been swept, like the Southern Cauldron, both very clearly demonstrates the shortcomings of command in Lugansk and indicates a certain lack of forces to liquidate the cauldron that has existed there for almost two months.

Overall, the operational crisis to the southeast of Lugansk continues, and the tactical outcomes of the battles near Novosvetlovka, Khryashevatoye and in the southern suburbs of Lugansk will determine the long-term operational, strategic and political consequences.

The offensive to the south of Donetsk continues; however, the Junta remains unable to take Ilovaisk and Mospino. And this is despite the fact that the main forces of the DPR Army that were freed up after the victory at Miusinsk and Krasniy Luch were thrown at the encirclement of the Southern Cauldron 2.0 and repulsion of the Junta’s offensive on Yasinovataya and Enakievo. Making use of its over superiority in troops, the Junta is attempting to flank Ilovaisk and Mospino, which have been in semi-encirclement for the past two days. In the suburbs there is ongoing fighting. The enemy is actively using both rocket and cannon artillery. The situation is difficult because here the DPR Army has very few reserves, which are otherwise involved in other areas, even though here there is an urgent need to enter into battle several batteries of howitzer or MLRS and 10-15 tanks. 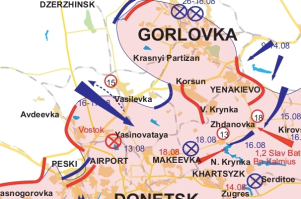 The Junta’s offensive on Yasinovataya has once again disgracefully chocked. The Junta was driven out of the town and, in addition, yet another “victory flag” was burned on video. This key centre is necessary for an offensive on Donetsk from the north, and it continues to be retained by the DPR Army, just as before. Significant help to the Yasinovataya garrison was provided by the forces redeployed here from Krasniy Luch and Miusinsk. The forces managed to stop and drive the enemy back. Here the enemy is expected to regroup and to resume its offensive.

Having safeguarded the area of Miusinsk and Krasniy Luch, the DPR Army now uses this area to maneuver its few reserves along the internal lines of communication. The exacerbation of the crisis in the area of Zhadnovka, as well as the strengthened shelling of Makeevka and Khartsyzsk will require the concentration of additional forces here in order to stop the Junta’s offensive in this area. For now, the Junta does not have sufficient troops here for a further offensive; however, the strengthening of the artillery fist in this area suggests that in the course of 2-3 days there may be a new strike here directed toward the highway that passes through Torez to Donetsk. It is possible that the Junta, having suffered a failure at Shakhtersk and Krasniy Luch, will make a third attempt to cut off the DPR from the LPR. Nevertheless, at this time the communications between the Republics along this key highway are preserved.

Overall, there have been no significant changes in the second edition of the Southern Cauldron. The resumption of the battles on the approaches to Saur-Mogila indicates that here the DPR Army is trying to avoid the Junta taking complete control of the height and that it is fettering the enemy reserves that the Junta could otherwise use to unblock the Southern Cauldron 2.0.

The enemy remains unable to surround Gorlovka or to take Enakievo, but the corridor that leads from Donetsk to Gorlovka is now quite narrow, so the Junta is conducting obvious operations aimed to cutting off the Gorlovka Protrusion. The main strike is being made from the side of Uglegorsk and to the north of Panteleimonovka, which according to some information is under the Junta’s control, while other sources indicate that it is controlled by the DPR Army. In general, it is in this sector that the DPR Army faces maximum risks because, in the event the Gorlovka Protrusion is cut off, substantial Militia forces would be left encircled, and the Junta would then obtain its much-desired local victory that would substantiate the continuation of the bloody madness. 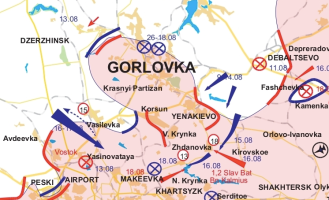 Donetsk itself is controlled by the DPR Army, and any frontal assault from the western direction is hardly possible, while in the north and in the south the Junta is mired in battles for Ilovaisk and Yasinovatay. In general, the city continues to be showered with shells and rockets, and this shelling is obviously terroristic in nature and are aimed at extermination of the civilian population and is aimed at hastening the humanitarian catastrophe.

Despite the continuing overall superiority of the Junta in manpower and military hardware, the ratio of forces is gradually equalizing and no longer indicates a blatantly disastrous situation for the Militia, such as it was in June and July. It is this progressive change in the ration of forces that explains the growing bitterness and tenacity of fighting in practically all the directions. The front line that the Militia has to deal with has narrowed, while the density of its forces has grown, and, as a result, the Junta has fewer and fewer opportunities to attack unprotected areas while evading frontal strikes.

It should be noted that, despite Kurginyan’s tantrums and predictions that, after withdrawing Slavyansk, the Militia will soon abandon also Donetsk, it has now been over a month that the city of Donetsk continues confidently to repulse the Kiev Junta’s offensive, which it is pursuing with maximum possible effort. This, unquestionable, is the achievement of Strelkov, who saved the capital of the DPR from being surrendered to the Junta when he timely withdrew from Slavyansk to Donetsk and organized the defense on the approaches to the city. Essentially, the fact that for over a month now Donetsk has been fettering the enormous forces of the Junta once again demonstrates how correct Strelkov’s decision was. He made it possible not only for the DPR to be saved, but also for the first Southern Cauldron to be created. And it is the Southern Cauldron that now is one of the main suppliers of armoured vehicles and military hardware to the Militia.

In general, the Militia at this time needs to drive the Junta out of Novosvetlovka, retain Yasinovataya, Ilovaisk and the corridor to Gorlovka, and also to knock the enemy out of Zhdanovka. At the same time, it will also need to find the troops to complete the liquidation of the two surrounded enemy brigades located to the south of Krasniy Luch.

And what is most important, is that with every day there are more and more people who understand that this war will not be over in the summer of 2014 (unless some kind of sudden political decisions are made) and will continue in the fall – even though so many claimed that it would end in May, June, July, then August. This war will not be over right away, this horror, just as in Yugoslavia, will drag on and on. And yes, you should be getting ready to collect autumn and winter clothing for the Militia. It is very likely that it will be needed.