Slavyangrad, the Hero City. Two Stories From the Front.

His name is Victor Nikolaevich. His radio call-name is “Deputat.” He is a resident of Slavyansk that rose up to defend his land. He is 56 years old. Now he is undergoing treatment in one of the Donetsk hospitals. He received a terrible wound in his abdomen. In the course of the operation, the surgeons removed virtually his entire colon. He barely speaks, with many interruptions. It is hard for him to talk. But he wants to talk, to tell about so many things – too much has remained unspoken and accumulated over the last few months. More, in fact, than he had over the course of half a century of his life.

“As for me, I was born in Russia, in Bashkiria, in the city of Ufa. I came to Slavyansk at the beginning of the 90s; the parents of my spouse live here. I fell in love with this city and with the people that live on this land. I went to fight because, as Vereshagin said in the “White Sun of the Desert,” I felt the pain for our country.

I am a man, and I was ashamed to sit at home, when the young guys from Donetsk, Lugansk, Kramatorsk, and from the many corners of Donbass defended my city. The kids gave me a call-name “Deputat.” This is because I used to work as an assistant to a council member – here, in Slavyansk, in our district.

When this all began, I kept on trying to convince my wife to go to Russia. Because I am not afraid for myself, I was only scared for her. And, finally, she agreed.”

Heavily wounded, after a multi-hour operation, lying in his hospital bed, Victor is worried about the people who live in Slavyansk. He speaks, with pain in his voice, about how they live there without electricity and without water, under constant shelling and bombing. With tears in his eyes, he tells me that a woman, an operation-room nurse who assisted the surgeon when Victor had his first operation, in Slavyansk, died the following day: “She saved me, but she died herself. Her name was Tatiana …”

“If you look at the militiamen defending Slavyansk, if you look in their eyes, you will see saintliness there. These people went against everything – against tanks, grenade launchers, automatic rifles. How could I do anything else? If we do not help these people, our city will be no more. And we will be no more. I bend my knee before the courage of these boys.

If you were ever present when their friends came to visit, you would really, truly understand what brotherhood means. It is worth everything. You will not see anything like that in any of the Hollywood cardboard movies! This is what brotherhood is. It stays with you for the rest of your life,” – Victor continues, – “Did you hear my chamber-mate’s story about a guy with the call name “Tikhiy” [Note: Quiet]? Whom they gathered, piece by piece, and buried under a tree? And made a notch, so as to find him later, after the war, and put up a monument for him. Can you imagine that there, under a tree, lies a man called Tikhiy. And his mother does not believe he is dead and waits for him to come home … And this is not the only such case. How do you live with this? … Do you understand, they are People. Heroes. I admire them. In your life you need to do at least one deed that you will not feel ashamed for.”

I don’t know how to respond to his words. All I can do is listen. In the course of our conversation, Victor Nikolaevich repeats the same phrase several times: “I have a friend from a technical school, Volodya Sherbakov. He lives in the city of Birsk, in Bashkiria. Find, him please. And tell him that I am alive.”

We are looking for the friend of Victor-Deputat. I promise, we will find him. And we will be sure to tell him that Victor is alive. People like him do not just give up.

They do not give in, either to enemies or to sickness. 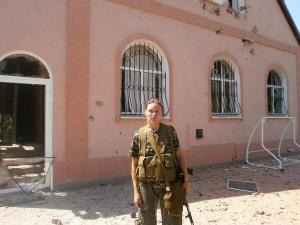 Yet another night in a besieged city. Again the siren is on, and “Ukies” are shelling the city once again. Again I had to quickly move to a bomb shelter. I reach for my gas mask and for the automatic rifle. There is no electricity, but, thank God, the generator is working, there is light in the bomb shelter, and I can write.

I converse with the command as well as with common militiamen. Despite the falsehoods of the Ukie media, I am convinced: almost 90% of the Militia are citizens of Ukraine. There are local Slavyansk residents, others from Donbass cities, from various regions of Ukraine, including Kiev. It is rare to encounter a representative from the Russian Federation. Very few that are from the Caucasus; there are Azerbaijanis, Georgians. I have not met any Germans either, although there are plenty “Russian Germans.” Among them is Igor Bezler, whose German family has been serving Russia for two centuries.

Rumours that Ukies are preparing to abandon Karachun Mount to our forces have not been confirmed. The shelling of the city is again coming from there. And there is no point for us to assault the Mount. There is a minefield all around it, in several rows. Besides, our militiamen would be left defenceless there – perfect target practice for the enemy aviation.

The artillery shelling of the city comes from several different directions, including Krasniy Liman, which is approximately 20 kilometres away from Slavyansk, as well as from the Artyom district. They have tried to break through from the South-West, but their attempts, thank God, have been fruitless so far. The mendacious Ukie media talks about 250 dead on our side and about hundreds of dead Chechens in the past twenty four hours … These numbers are completely absurd: there are not enough Chechens in the entire DPR [Note: Donetsk People’s Republic], and the number of dead militiamen has been exaggerated about fifty-fold. And there are only two wounded on our side.

As for Ukies, they suffered substantial losses, although the exact number is unknown. Over the entire duration of the conflict, their losses have reached several thousand. The way Ukies treat their own dead is simply monstrous and speaks to the essence of this massacre. Eyewitnesses have told me that the nearby ponds and rivers are full of corpses of soldiers of the Ukrainian army and of the NazGuard [Note: Ukrainian National Guard]. They have neither the time, nor the desire to bury their dead in a human, let alone Christian, way. Sometimes they simply leave their dead where they fell; same with the heavily wounded. A common soldier is nothing but cannon fodder for the Ukrainian army … Risking their own life, militiamen commonly drag from under machine gun fire their own wounded, as well as the dead.

My opinion may seem to be somewhat of a stretch, but the very course of events has been demonstrating that I am right. The enormous Ukie army has been shackled by the forces of the Militia, which are 1/10th the size, let alone enormously overwhelmed by the Ukrainian army’s superiority in armoured vehicles and in aviation. And yet, all the efforts of the neo-Banderovites have been futile.

It is the second time now that Ukies have shelled the Cathedral of Seraphim Sarovskiy, that very same one that had its chapel destroyed a few days ago.

In Semyonovka, they are using shells with poisonous gases, filled with phosphorus. Yesterday they pulled up about six “Tulpan” systems [Note: 2C4 Tulpan, a 240mm self-propelled mortar] to Krasniy Liman. This large-calibre artillery, with 240mm calibre charges, possesses enormours destructive power (one “Tulpan” shell can demolish half a five-storey building).

However, despite all the colossal superiority of the enemy in armoured vehicles and in manpower, the militiamen perform feats that can – without exaggeration – be compared with the great deeds of their predecessors during the Great Patriotic War. One eyewitness told me of a recent case, when 50 militiamen fought against 500 enemy fighters, who were supported by tanks, while the militiamen had none. But, with God’s help and through a feat of courage and bravery, they truly worked wonders: they chased them away! And such cases are many amongst a multitude …

Everyone that I have talked with has unanimously said the same thing: “We will stand firm to the end, and we will fight till our last breath!” This heroic mood is uplifting. And I believe that God wil grant us victory, despite all the hardships!

3 thoughts on “Slavyangrad, the Hero City. Two Stories From the Front.”